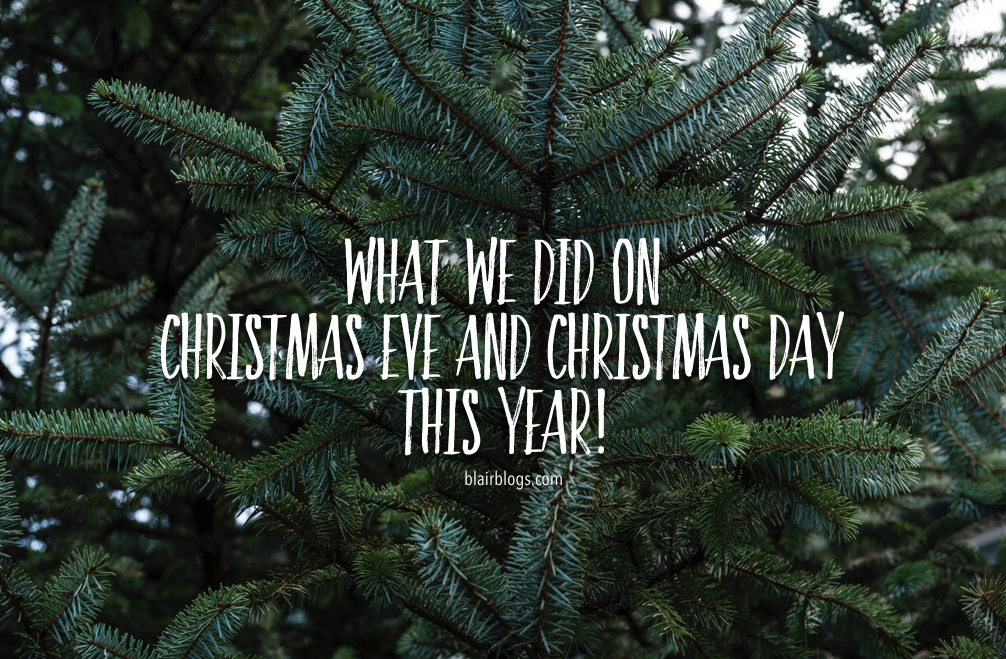 It’s funny how there’s such a build up for the holiday season, and then, it’s just over. I tend to be ready for a change of focus by the time December 26th rolls around, especially since Riley’s birthday is on the 27th. That’s when I flip the switch from Christmas celebrating to birthday celebrating! (Clearly I love Jesus all year round, but you know what I mean.) And, because the season comes and goes too quickly, I like to document Christmas here on my blog so that I have a sort-of online scrapbook to look back on.

This year, Christmas Eve and Christmas Day were slightly different than in years passed. First of all, Riley and I are married (yay!), so we actually spent the entire holiday together with my family in Maryland. (Last year, he flew to Maryland on the day after Christmas.) It was wonderful to be together each day, and his presence helped to ground me as I navigated the waters of staying under my parents’ roof, with my siblings (who were both very sick), in a teeny room for eight days. #ourhomehasneverfeltsobig #thisintrovertneedsalonetime Additionally, we have spent lots of time with extended family over Christmas in the past, but as we’ve all grown older, moved away, gotten married, and started families, there are now in-laws and children to consider in the plans, which inevitably changes things.

I’ll start with Christmas Eve. In the morning, Riley and I slept in, got showered and dressed, and headed out for some breakfast. We ended up at Dunkin’ Donuts, mostly because there aren’t any near us in Texas! After some iced coffee and donuts, we headed back to my parents’ house to get changed and primped for church, which was at 3:30pm. As with most churches on Christmas Eve, it was important that we arrived early so that all of us could find seats together. We left the house around 2:45pm and marveled at the warm 70 degree weather! We didn’t even need coats. It was so weird! Below is a would’ve-been adorable family photo…but the person who took it didn’t know how to focus an iPhone, apparently! 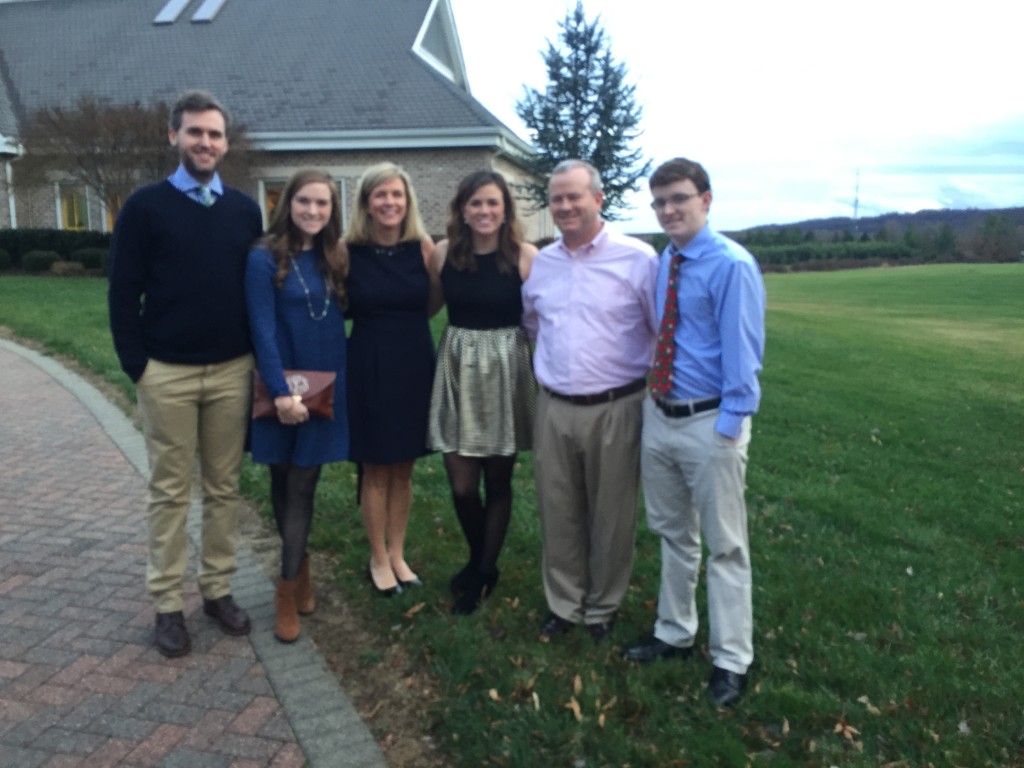 The church service was lovely, and afterwords, we stopped by my aunt’s house for some appetizers before heading out to a local Italian restaurant for dinner. Every other year, we’ve had a big Christmas Eve dinner and party at either my grandmother’s house, my parents’ house, or one of my aunts’ houses. But because our group was so small this year, the in-home party was cancelled and a reservation was made instead. This was really disappointing and difficult for me, if I’m being honest. Christmas Eve has always been my favorite day of the year because it has always meant catching up with my mom’s side of the family, who I don’t get to see very often (she has eight siblings, so it’s a logistical nightmare!). I especially look forward to seeing my cousins, but this year, only two were in attendance (there are 17 total, not including spouses and children). My maternal grandmother, the matriarch of the family, was in the hospital following an intensive spinal surgery that she underwent the week before Christmas, so she wasn’t even there! Plus, we were seated at a long rectangular table, so I only got to talk with the people sitting around me, who were, naturally, my own family members. I don’t mean to sound negative, but it simply didn’t feel like Christmas Eve sitting in a restaurant! I hope we’re able to come up with a more intimate and special tradition to replace our old one. Still, dinner was pretty tasty and it was nice to see my family who was there.

After we got home from the restaurant, Riley and I changed into our pajamas. Then, I suggested that we try the new carbonated bubble face mask I had bought (solely based on the hilarious reviews and pictures, if I’m being honest), so we smeared it on our faces and then laughed and laughed as they foamed up to be huge clouds. Even though I purchased the mask on a whim, it turned out to be highly effective. In fact, I just did another mask this morning! Once my mom and sister saw our faces, they tried out the mask too. More laughs! My mom just ordered her own jar of it because it really does work! 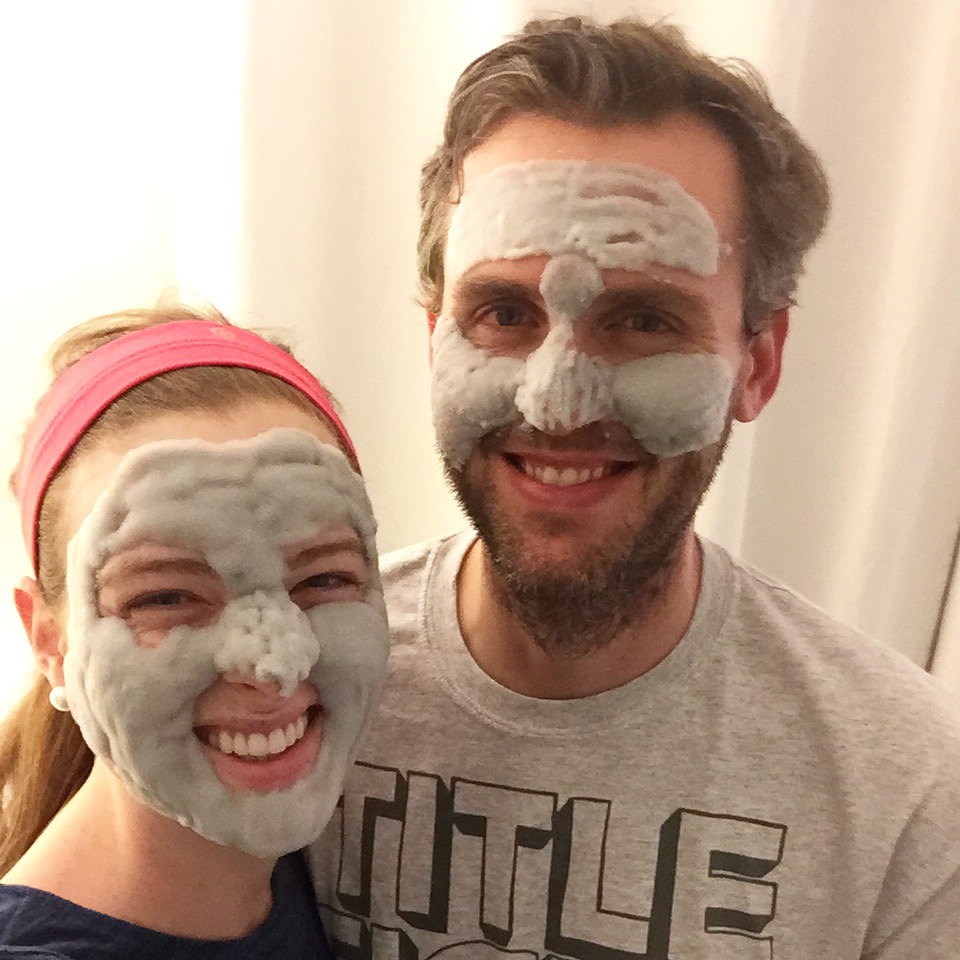 Around midnight, we all gathered in the living room to exchange sibling gifts. This is something we’ve done for years as a way to start Christmas early and make it last longer. So, my brother, sister, me, and Riley all exchanged gifts. Usually we wait until Christmas morning to give our parents their gifts, but we ended up giving them out as well on Christmas Eve! I really love this hour or two–it’s super low-key and casual, and it really marks the start of celebrating Christmas for our family!

We finally got to bed around 2am and awoke on Christmas morning eager to start celebrating! First, we took our traditional siblings-on-the-steps photo, of course. Riley was included this year. I’m not sure how to feel about that. He is decidedly NOT my sibling.

Then, it was time for breakfast. We usually rely on Pillsbury for our traditional Christmas morning cinnamon rolls, but this year, I decided to step up our game a little, and made Pioneer Woman’s cinnamon rolls for breakfast! They. Were. Delicious. The original recipe is here, but I used this small batch version…because 72 cinnamon rolls is aggressive. 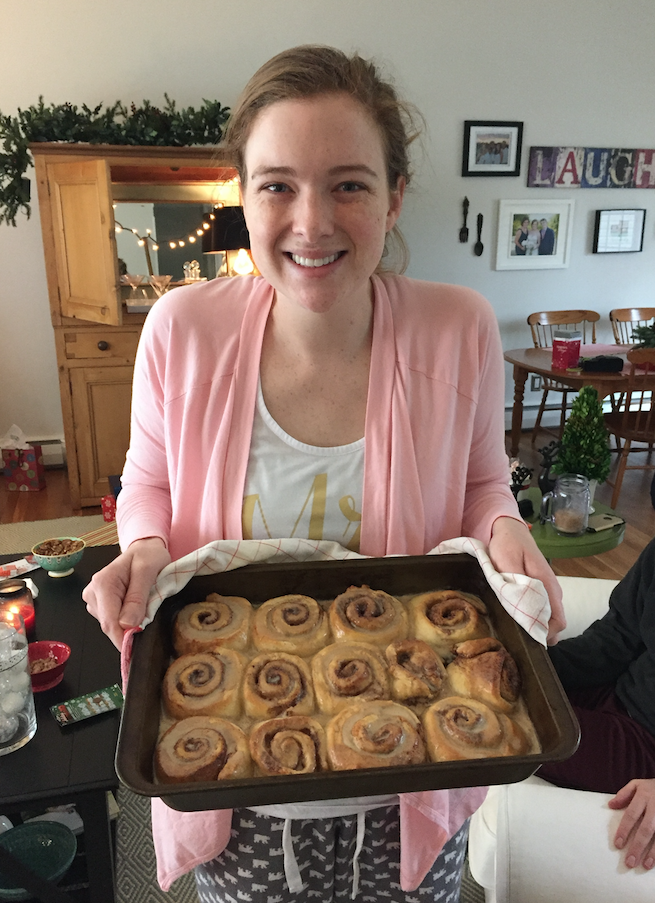 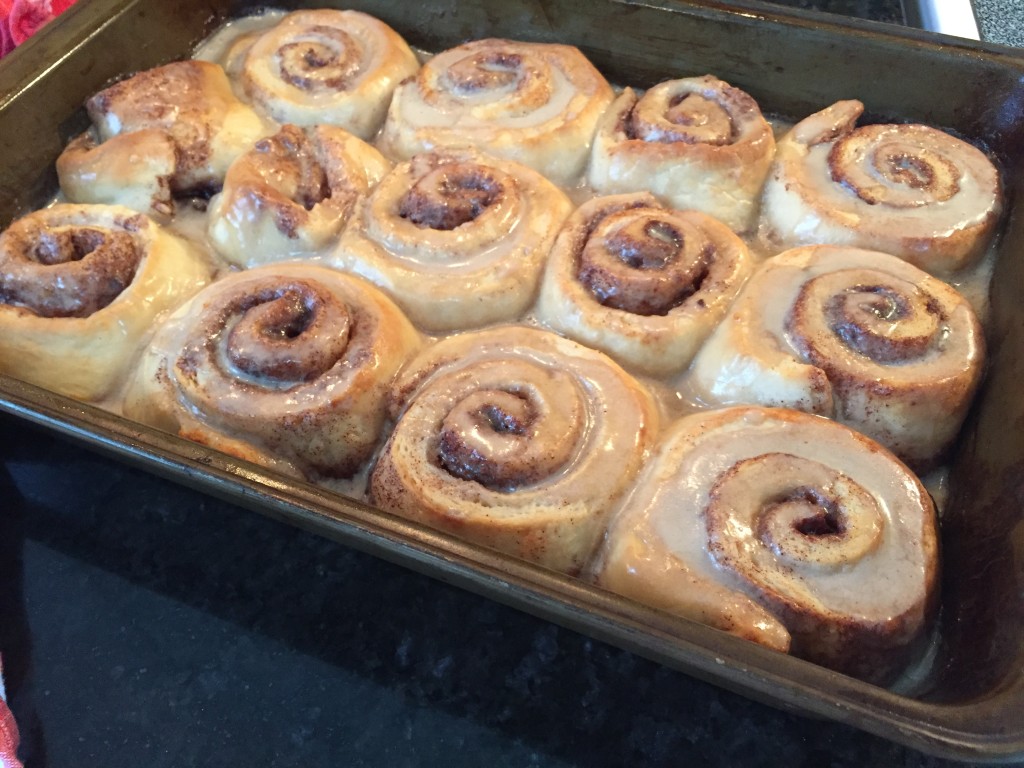 After some breakfast, we opened our stockings, and then my parents surprised Riley and I with a trip to Disney! (You can read all about that here!) Here are two priceless photos of us finding out! (I’m keeping it really real right now, because I look crazy!) 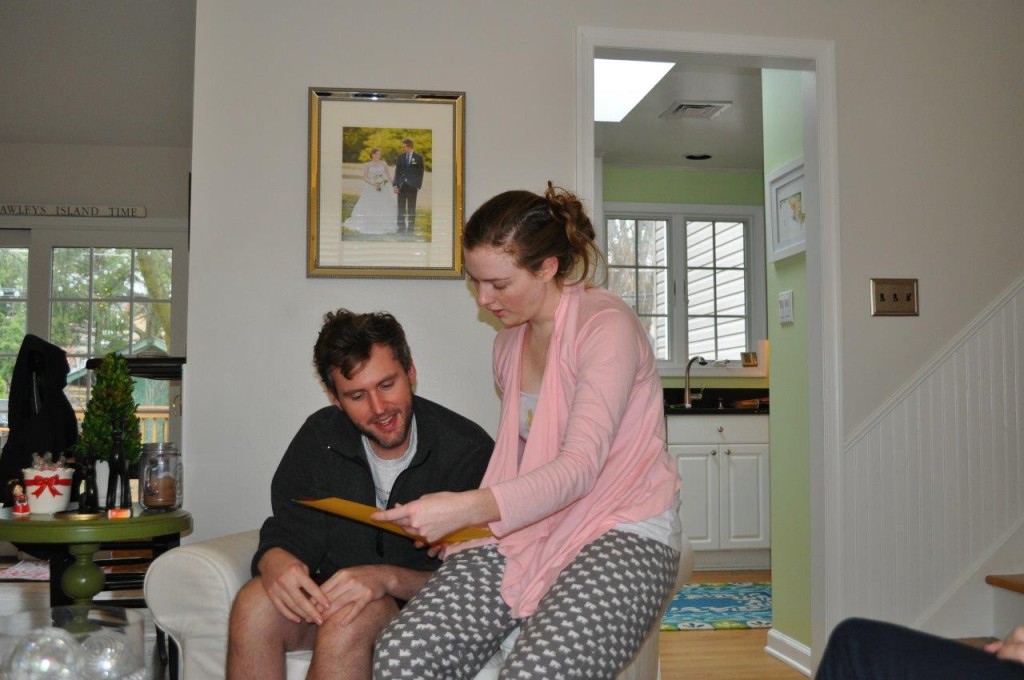 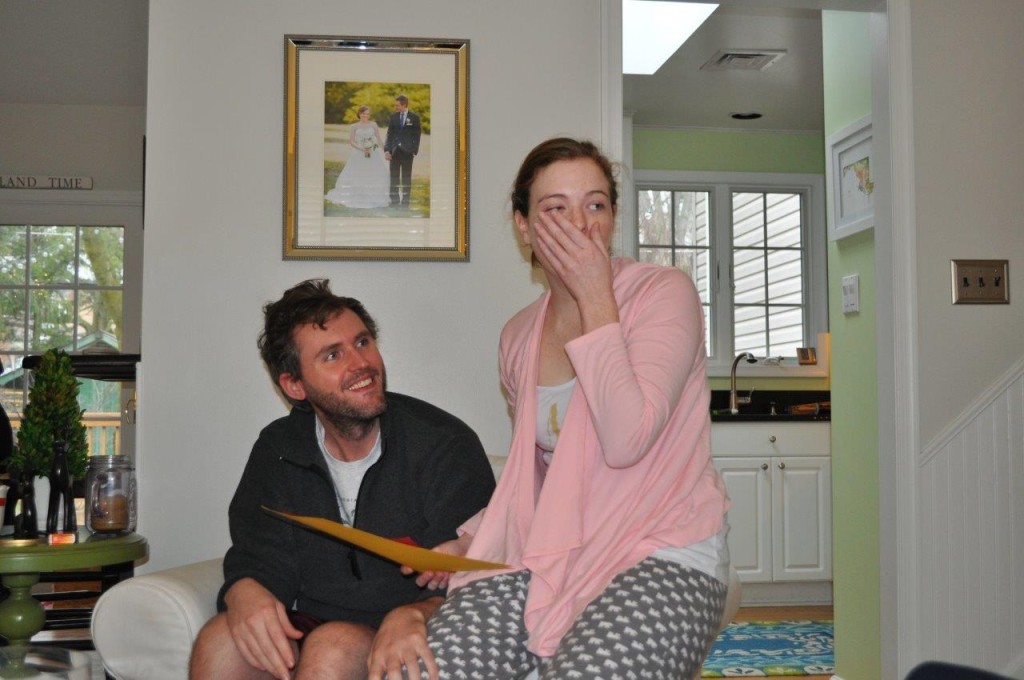 Once all of the gifts under the tree had been opened, we got dressed to go to my Aunt Sharon’s house for Christmas brunch, which is a long-time tradition. (We call it Christmas brunch, but really, we always stay for dinner too!) I love my Aunt Sharon dearly (she’s my blood aunt but also my godmother), so any time spent with her, her husband, and my sweet cousins is time well spent. My paternal grandparents always join us too since my dad and my Aunt Sharon are their only two children. Mimi and Poppy, love them dearly! I love spending time all together, we always have so much fun! 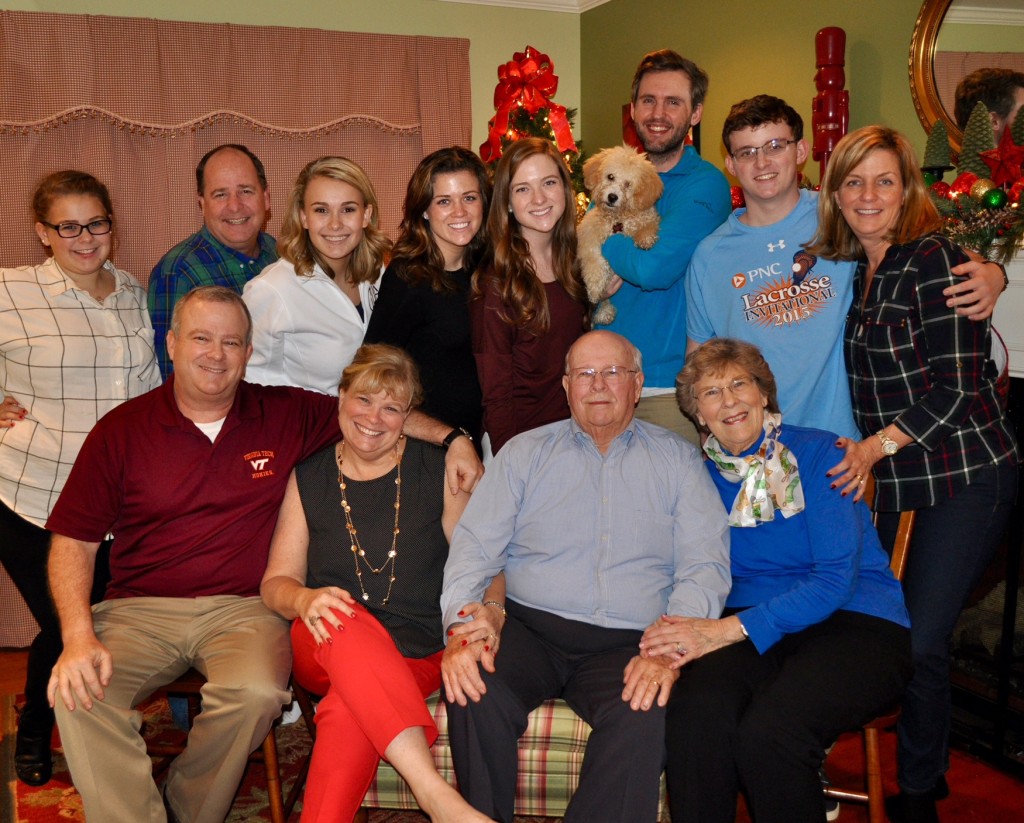 Hours and thousands of delicious calories later, we hugged everyone goodbye and drove back to my parent’s house. Then, Riley and I booked our trip to Disney! Yes–on Christmas night! (Again, you can read about that here!) What a super fun way to end our Christmas day! #we’recomingforyouMickey

It’s weird how Christmas changes as we age, isn’t it? This year’s celebration was nice, but it felt very different from years past. Kind of “off.” Maybe it was because our Christmas Eve tradition changed so drastically? Or because Charley wasn’t with us? Or because my Mom-Mom was in a hospital? Or because we’re married now and it just feels weird to try to fit our solidified routine into someone else’s? I don’t know if I can pinpoint it exactly, but that’s okay. It’s all a part of the journey. And nothing–not growing up or new traditions or anything else–can change the beautiful miracle of Christ’s birth or precious time spent with family.

// I hope you had a very Merry Christmas! How did you spend it? How has it changed as you’ve gotten older?