A love story isn’t just “Nice to meet you,” “I love you too,” “Yes, I’ll marry you,” and “I do.” In fact, it’s the thousands of tiny moments in between those big milestones that make a great couple and a great love story.

Today I’m going to share a few of my favorite tiny moments in my relationship with Riley. (In case you’re a new reader, first of all–welcome! Second of all–read how we met and fell in love here and about our engagement here.) These moments are small, but truly they’re what I hope to remember for years to come.

Crying in the Outback Parking Lot

Riley was unexpectedly in town one Friday night because I got very sick and had to go to the ER (turns out it was dehydration mixed with a 24 hour stomach bug). Once he heard I was at the hospital, he immediately got in his car and drove three and a half hours South to comfort me in my pathetic, pale, sickly state. This memory takes place the day after I was discharged.

Because I had been ill, I wasn’t up for much of anything. All I did was sleep all day. But since I had been asleep, I hadn’t eaten. So when I finally started to come out of the groggy, sleepy state on Saturday evening, I was really, really hungry. Surprisingly, I was craving Outback Steakhouse. Riley agreed, so we headed to dinner together.

Our dinner was lovely. As usual, we giggled throughout dinner, tried to figure out which couples in the restaurant were newly dating, and shared funny childhood stories. There was a couple sitting in the booth behind me that we debated for at least 15 minutes–dating, friends, or brother/sister? He thought dating. I thought friends.

After dinner, I climbed into the passenger seat of “Lyla,” his car (named after Lyla Garrity on Friday Night Lights), while Riley got in the driver seat and turned on the heat. It was a cold, rainy night. I remember sitting there watching the rain slide down the windshield vividly.

As I started to think about how full of gratitude I was–for my restored health, for this amazing man, for even the prospect of a future with him, warm tears started to stream down my cheeks. Initially, I tried to hide my face, but finally I looked at Riley and told him how I was feeling. As I spoke, the tears came faster and my emotions grew. I remember saying, “I can’t believe that God gave me you!” over and over. Although he didn’t cry, don’t be fooled…we both got emotional.

Our 30 minute thankful-fest was such an unexpectedly warm and tender moment, even if it was on the side of a major highway. I loved experiencing the joy of an intimate second in time, in a warm car, in a rainy city, on a random Saturday night that no one else may ever remember.

Because I work Sunday-Thursday instead of a more traditional Monday-Friday, Riley and I frequently meet up on Thursday evenings. One Thursday evening, I had driven to Denton for the weekend, and after eating a light dinner, we decided to drive to the square and grab some Beth Marie’s Ice Cream (pictured below). If you’re ever in Denton, you must go to Beth Marie’s. It is absolutely adorable! 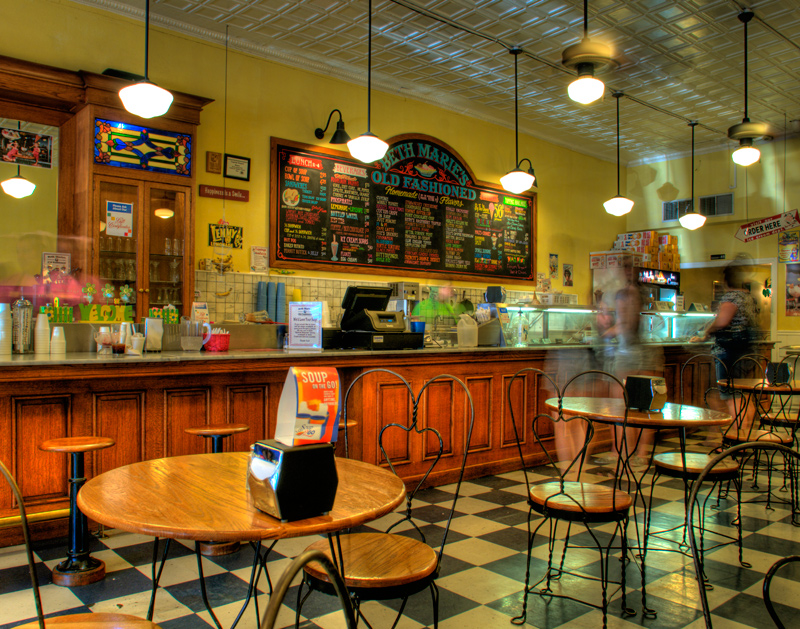 After I grabbed a waffle cone with one scoop of cherry chocolate chip and one scoop of plain chocolate (and Riley got a small hot fudge brownie sundae), we walked across the street to sit on the steps of the courthouse (pictured below). And yes, I remember exactly what we ordered. I can tell you what both of us were wearing as well, if you’d like, and even the name of the dog being walked in front of us. 😉 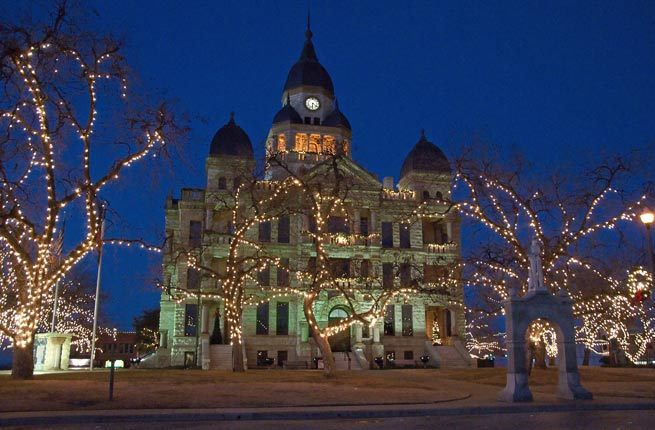 Anyway, as I said, we found a spot to sit on the steps, chatted, and people watched. There were a lot of things going on that night, which was all the more entertaining. What’s better than two scoops of ice cream and dozens of people to observe?

After a while, I looked over at Riley, and I remember closing my eyes, smiling, as I felt the warm summer air blow over my face. That night was so gorgeous, it felt like a movie. We locked eyes and didn’t say a word for at least 10 minutes. I just looked at his face, thinking, I am completely in love with him. (Full disclosure: My second thought was when is he finally going to say I love you? …It ended up being the very next day!)

In that hour that we sat on the stairs, it was as if each one of my senses was engaged in the best possible way. Of course it tasted like ice cream, which…need I say more? It smelled like warm summer air, with hints of the warm waffle cones Beth Marie’s was making. The cool stone felt good to sit on and my worn-in sweatshirt was comfortable. The sounds of people mingling, children laughing, and shop doors ringing as they opened and closed made me feel alive. And finally, to see the lights strung in the trees, the moon hung beautifully in the sky, and the person I was completely in love with looking back at me was simply divine.

That hour on those steps is a memory to treasure indeed.

Back in college, I had the awesome experience of studying abroad in Sevilla, Spain for six months. During that time, not only was I able to sharpen my Spanish language skills, fall in love with Sevilla, and learn that hating seafood makes it hard to live in a place where fish is consumed twice a day, but I also got to travel to several other cities, including Paris, France.

First of all, let me say: Paris is everything it’s chalked up to be…and then some. I absolutely loved my time there. (So much so, in fact, that as soon as Riley and I got engaged, I emailed a travel agent about a Paris honeymoon…turns out our budget won’t cover a ten day trip to France. Who would’ve thought?)

Anyway, while I was in Paris (which I blogged about here, in my Spain blog), I had the best meal of my life. Maybe it’s because I was a tired traveler, or because it was at an authentic French restaurant, or because I was extremely hungry. But no matter the reason, it was the most delicious meal ever. It started off with a fresh salad, then moved on to an unbelievable steak, and finished with light chocolate mousse and cream sauce. My mouth is watering just thinking about it.

When Riley and I were still getting to know each other, I casually mentioned this meal. He asked me a little bit about it, but our topic of conversation changed quickly.

Then, one evening, I arrived at Riley’s apartment for dinner and was hit by a delicious smell. When I inquired as to what we were having, he smiled, and continued to cook. Y’all! He recreated my favorite meal exactly!! I still don’t know all the details surrounding how he did it, but it was almost exactly the same. Apparently, he had researched traditional French steak prep, sauce, etc., and recreated all of it. (Even the crème fraîche sauce on the steak, which takes days to make!)

Of course, this gesture was super sweet…and super delicious. But it was also very meaningful for me because it all pointed to one thing: Riley really pays attention. Not only did he remember that my favorite meal was in Paris, he remembered it exactly as I had described it, and successfully attempted to recreate it.

I’ve said it before, and I will continue to say it. I am so blessed by God’s provision in my life–for He has given me a man who I don’t deserve and a love story that feels like it’s a screenplay. Thank you, Jesus, for the way You love me! I promise to cherish these tiny moments–because really, they’re not tiny at all.

What tiny moments in your life do you cherish?