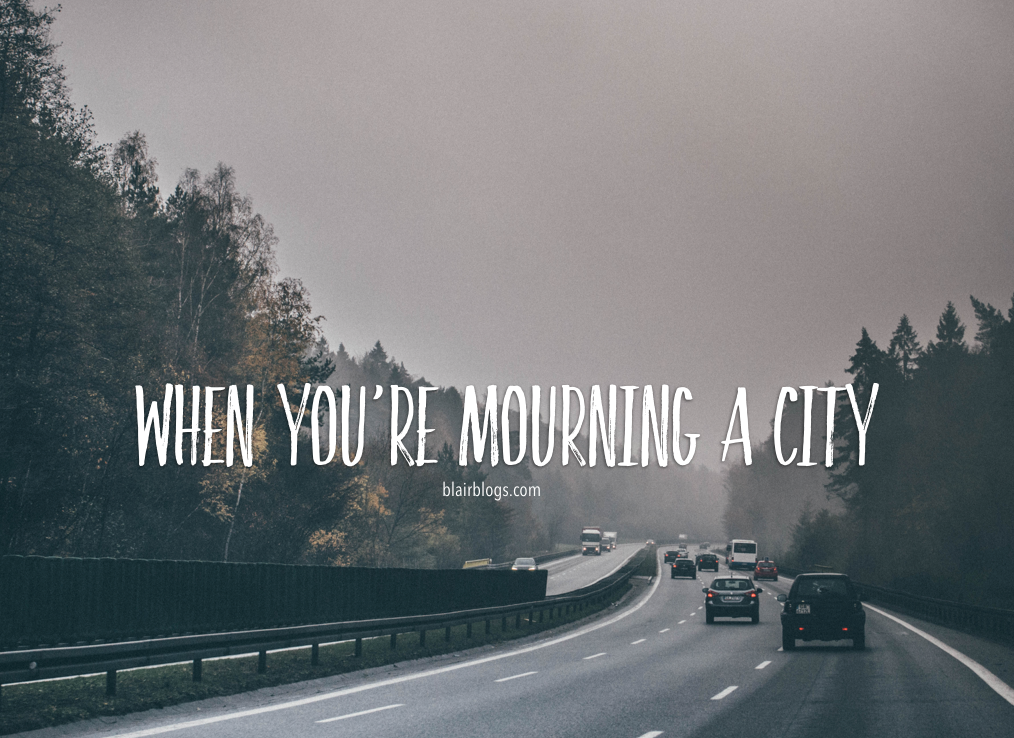 Have you ever moved to a new place and then wanted desperately to freeze time in your old place? Ever looked back on the people who made your life full and the places where you spent your time and the roads you used to take and wished you could go all Elsa-from-Frozen and freeze it all right as it was?

Because sometimes the hardest part about moving is watching the world continue to spin. It’s seeing posts online of your old friends and their “best friends” and feeling sad because, yeah, if you still lived there, you would be in that photo too. But you’re not. It’s hearing about events and get-togethers and gatherings that you would’ve been invited to–that you would have hosted, even. But you can’t go ahead and host a gathering from four hours away, now can you?

It’s seeing your filthy, matted little dog and thinking, for the thousandth time, I wish I could take him to Kim down the street, she’s the best groomer, like, ever. It’s your own hair getting long and heavy with fuzzy, split ends and taking a deep breath before diving into online reviews because you just miss your old stylist who you knew and loved.

It’s wanting to walk onto a church campus and be known. To have staff and little kids and volunteers and teenagers hug you and chat with you and look forward to seeing you next week. Because you’ll be back next week, and you’ll feel at home then too. It’s hearing life-changing news from friends and wishing so hard it hurts that you could be a part of their story as they walk through it each day. Wishing that you could drop off a dozen cupcakes and pray for them or meet them for coffee and hear all about their plans or help them move into a new house and paint the walls to music together.

I may be selfish, or at least in denial, but I know I’m not the only one who feels this way. When you step out of a life to make a new one, and everything in your old life keeps on turning, it hurts. Sometimes, it’s just a little painful, like a burn on the tip of your tongue from sipping your coffee too eagerly. You know, the kind that fades in a few hours? But sometimes, it really hurts, and it feels like grief that weighs heavy. And the sobs would come if you let them, but if you’re like me, you can’t let them come up most of the time, because then you’d be shocked at how frequent and hard they hit, like waves crashing relentlessly.

And I think the pain cuts so deep and watching my people move on with life hurts so much because no one, no one, wants to be on the outside looking in. When things stay so close to the same, but you’re just not there–how do you process that?

That’s why, in my weak moments, I wish that everything could just freeze, because the moving forward feels like moving further from what I was a part of, further from what I knew. And if it can’t freeze, can everything where I used to be just change? Can it change so drastically that I can’t imagine myself there anymore…because everything is so different from the way I left it? Though that would be tough in its own right, surely it’d be easier than this.

I try to self-talk and remind myself that this is where God has called me, that this move was my first real act of sacrifice in my marriage. That I was given the opportunity to move here to pursue my dreams, but that it meant I would have to abandon a lot of people and places that I had fallen in love with. I tell myself daily, you just moved here. It’s not even been half a year, give it time, it takes time.

And I stand on the truth that’s real, but still I feel heavy, hard emotions pouring over me. Don’t let anyone fake you out–walking in God’s will isn’t always peachy. It’s peaceful, because I know that I’m living in obedience, but easy? Not always. If I’m honest? Not usually. I’ve found it to be abundantly true that following Jesus doesn’t sometimes catalyze real, gritty sacrifice and hard goodbyes and gracefully shutting doors that you desperately, deeply want to keep open; it always does. Seriously. There is not one true Christ follower I know who hasn’t given up and sacrificed and walked away from hard, hard things.

What I do know is this: I know that a white knuckle life is one that I refuse to live. I refuse to hold on to every piece of my life so tightly that my knuckles are white with tenacious fear and a grip that won’t release. No, no, no. I’ve lived that way before, and I was more afraid and insecure then than ever. Living open-palmed, it hurts. Telling God that He has my life and everything in it? Ouch. Can I just hang on to this one part? Please? I really like it!

I know that community is coming, being known is coming, feeling at home is coming–I know this because my God is faithful to me, always. But also? I know that right now, today, I feel sad. And sometimes, in these thin moments, I wish I could freeze everything that I left so that it didn’t have to hurt so much. And I know I’m not the only one.

So here I am, my heart wide-open, hoping that my story brings you a little comfort or peace, because we’re not islands. We’re not made to live alone, and we don’t experience life independent of one another. This is me, the real me, happy to walk in my God’s will, but sad that I don’t always like the path. What about you?