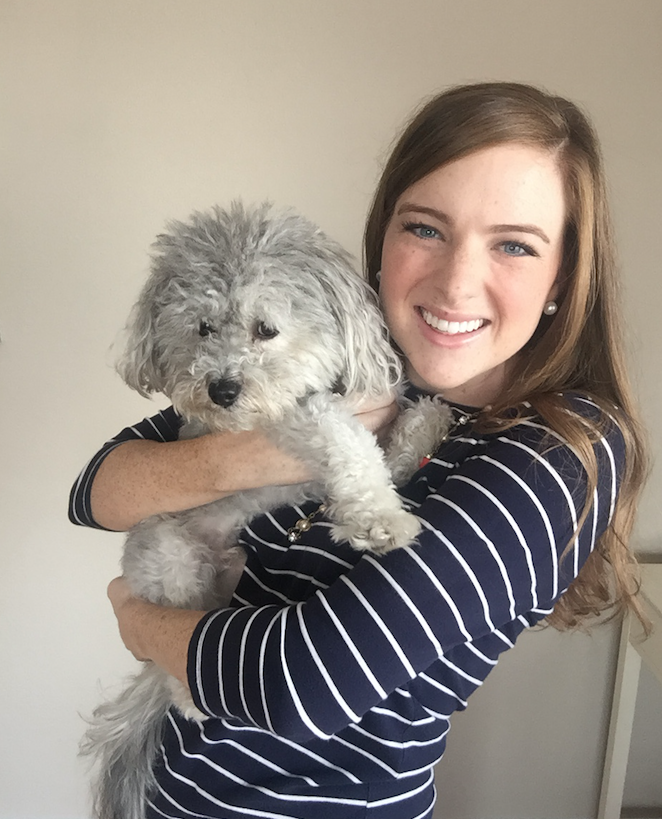 It’s no surprise to anyone who knows me (or follows me on Instagram) that I am absolutely in love with my dog, Charley. He is a nine pound answered prayer and has brought me unbelievable joy in the past almost-two-years that I’ve been his mama.

A little background: I got Charley when he was 12 weeks old. It took me about a week to name him, which is comical because he rarely gets called just Charley anyway (unless he’s in trouble!)! We call him “Charley Bear,” “Bear-Bear,” “Piddles,” “Widdles,” “Widdle One,” “Pids,” “Piddie Pie,” “Bubbie…” okay, I’ll stop. My crazy is starting to show.

He was a full-throttle, chew-on-everything, not-potty-trained, wild-energy-all-the-time puppy until he was fully six months old. After that, I could tell he was starting to calm down slightly. By a year, he was napping more throughout the day, but still a pretty relentless ball of energy. He gradually grew up between his first birthday and his second, and I have noticed a marked difference in his behavior since about the time he turned two last month (on September 28th! 🙂 ).

When Riley and I went to meet my aunt’s precious new puppy, Macy (look at this baby!) a couple of weeks ago, I was taken right back to Charley’s puppy days and floored at how quickly he’s grown up. Riley and I kept laughing at Macy’s crazy puppy behavior because Charley used to be just as spastic and wild! Honestly, it almost brought me to tears because my little bear has grown up so, so fast! Heaven help me when I have human babies. Oy. Look how little and perfect he was as a baby…in a parka…in the snow for the first time… #hearteyes #stickaforkinmeimdone 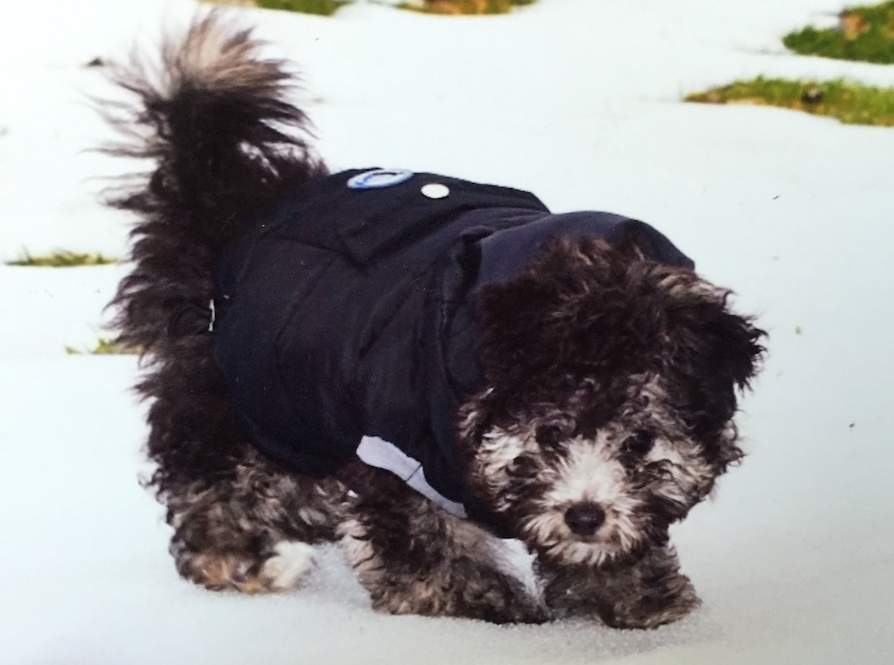 The point that I’m trying to make is that Charley has moved to the next stage of doghood, whether I like it or not. He is much calmer, sleeps a lot more often, is more obedient (most of the time), generally understands the rules (like not to run outside if the door is propped open), can take longer walks, and is content playing by himself without nipping at my toes or whining if I’m not paying attention to him! He still has his sassy little personality (and he always will), but he’s not a puppy anymore.

Because of his growing up, I have made some changes in the way that I care for him to keep him happy and healthy (and to suit Riley and my lifestyle). Here’s what I’ve done to nourish my Charley Bear’s body and mind as he has grown to be more particular and independent!

For much of his life, Charley thought literally everything was his toy. My slippers, Riley’s socks, pillows on the bed, plastic water bottles, his bed…he even chewed on my walls for a period of time. (Not to mention his deep-rooted love and affection for power cords of yesteryear! That one was the worst!) 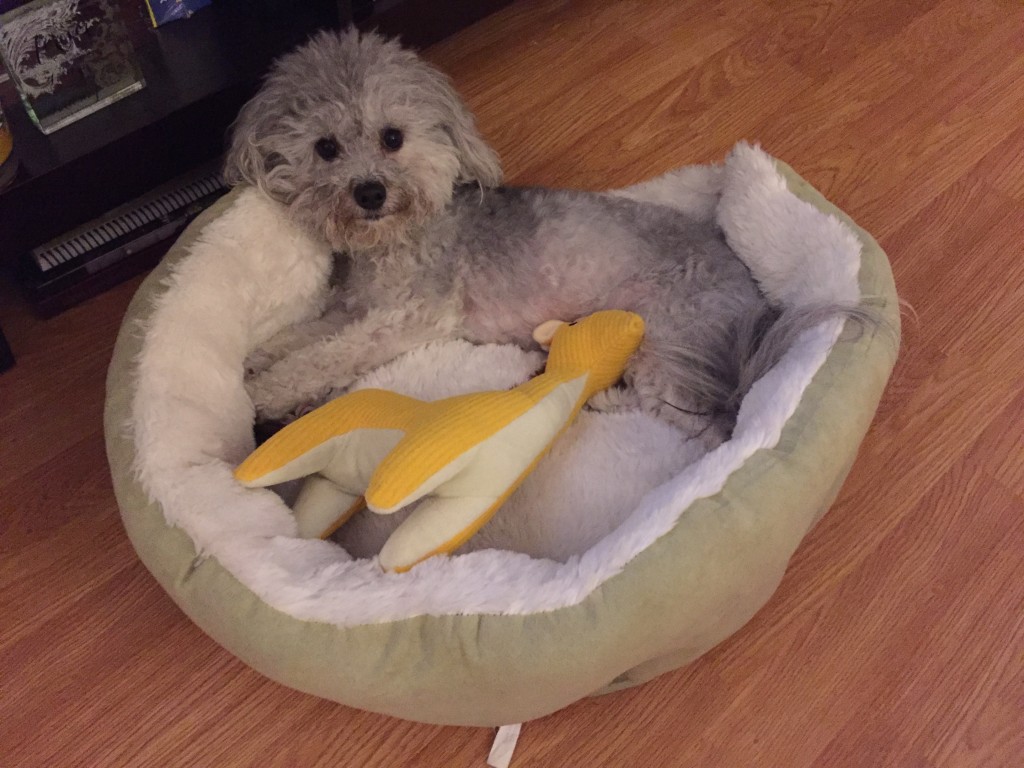 Now, he knows which toys are his and that the rest of our household items are not to be chewed on, thrown around, or played with. But where one toy would keep his attention for months in the past, he now becomes more bored with the same toys day after day. We have started cycling toys in and out to keep his little life interesting! It’s super easy (we just put half of his toys away in a basket where he can’t get them, and then swap them for the other half when he seems to be getting bored), and it’s adorable to watch him rediscover his beloved little stuffed fox or giraffe! Current favorite: definitely the giraffe. 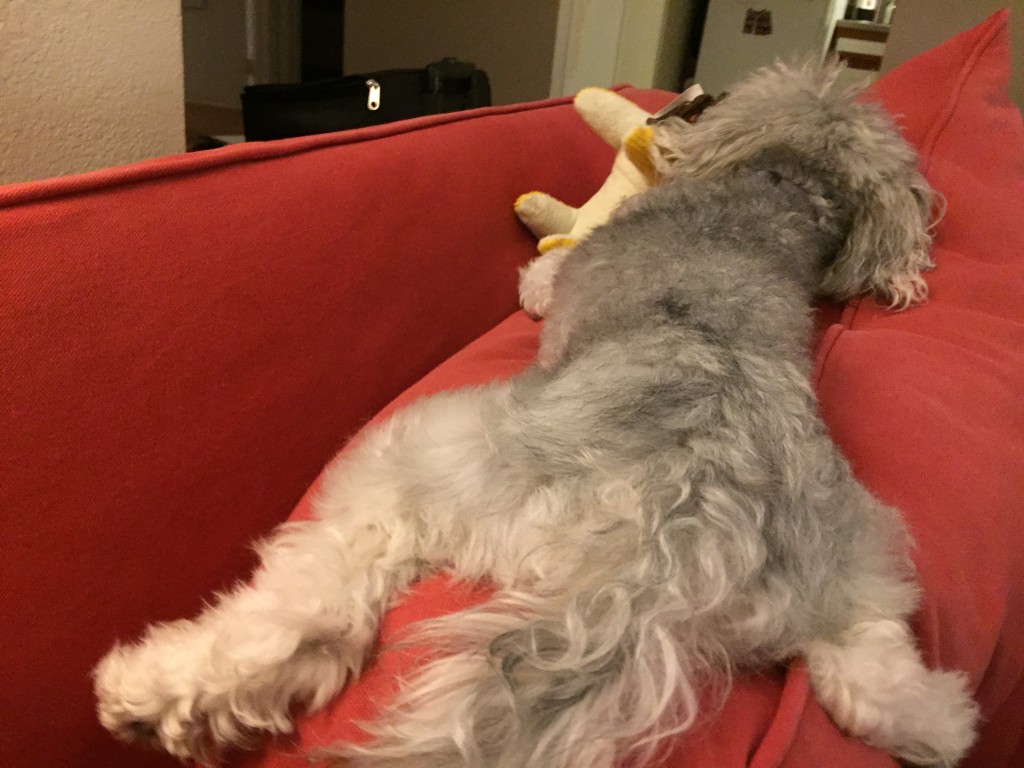 He had us cracking up the other night sleeping at the top of our couch with his giraffe (pictured above)…just sprawled out, completely comfortable! 😉

I knew that it was about time to switch Charley’s food when he turned one, but I waited to actually do it because I truly didn’t want to stop buying puppy food for him–because I wanted him to stay a puppy forever. (I know, I know, I’m ridiculous.) When he stopped eating his food altogether (well, at least until he was nearly starving), I knew it was time to switch out his old baby food for something more appetizing.

The struggle is that I truly care about the food I put in my little guy’s bowl. I want him to be as healthy as possible for as long as possible, so it really matters to me that there isn’t a bunch of weird junk in his food. Another piece of my dog food struggle is that Charley is extremely, extremely picky. It’s so weird. I’ve never, ever known a dog that turns down food–but mine does, all the time! Like how he won’t eat carrots or apples, but loves lemons. My dog loves lemons. Riley says it’s because I raised him that he’s so quirky! 😉 Whatever the cause, I have to find food that I feel good about serving him–that he’ll actually eat! 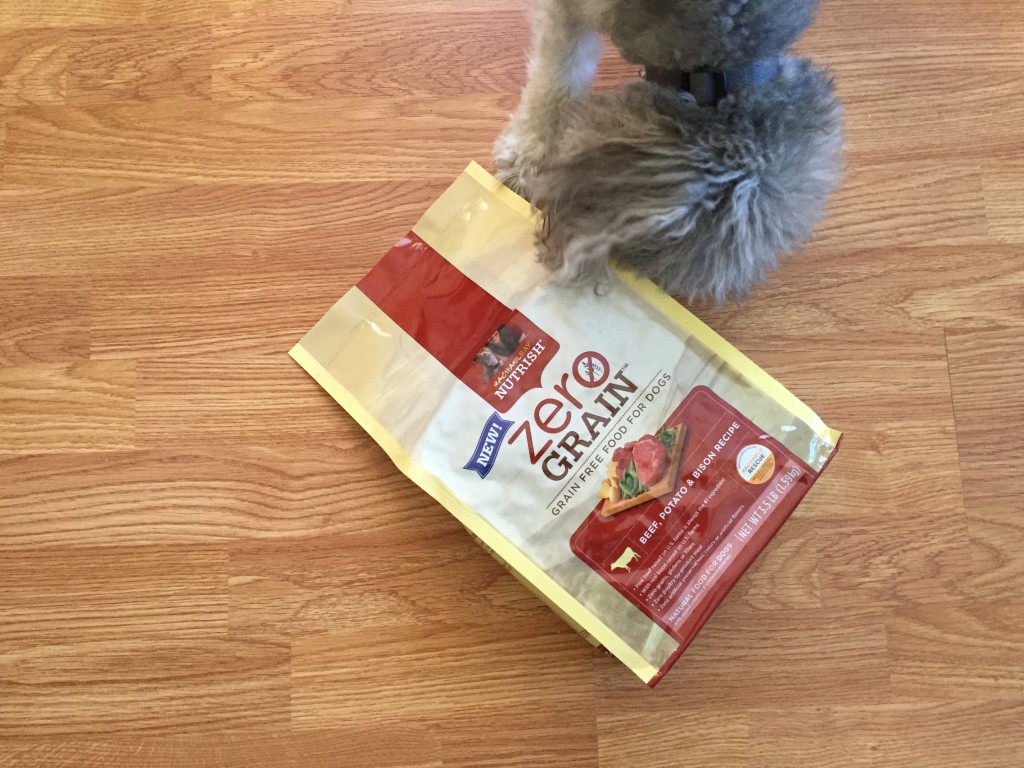 Immediately I noticed the huge text on the front of the package: “zero grain.” Another good sign. When I turned the package onto its side to read the ingredient list, I was really impressed. 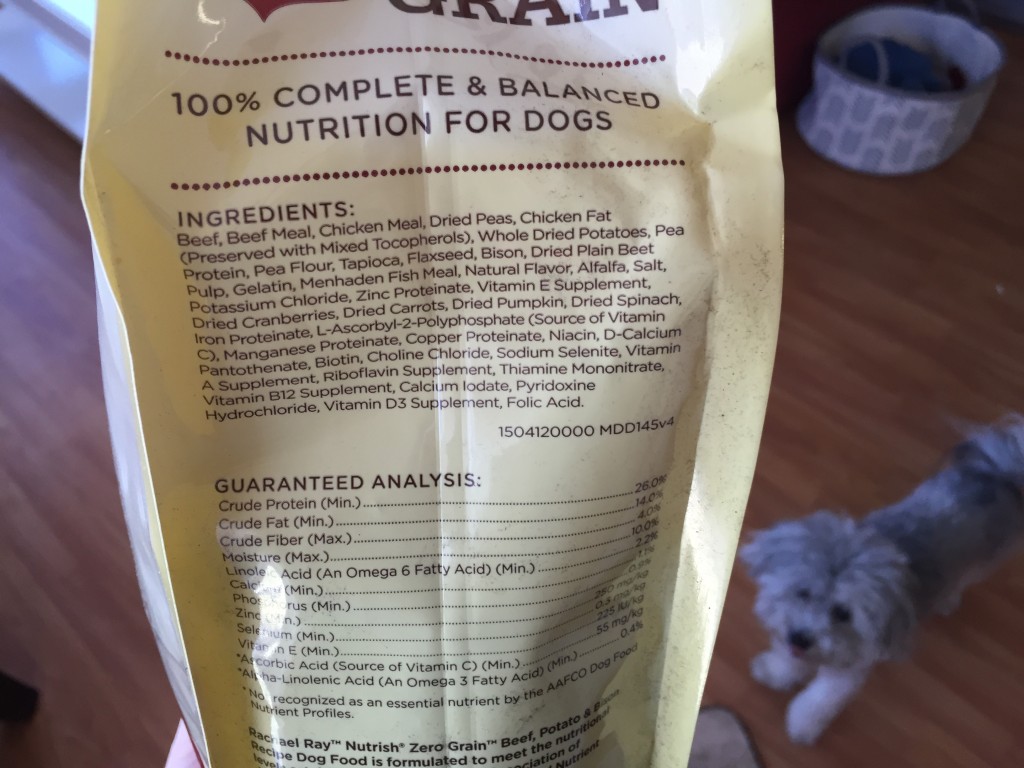 The ingredients are pure and simple, and I can pronounce them! (Hooray!) I love that the first ingredient is real beef (raised on US farms), and that there are no grains, glutens, fillers, or artificial flavors, colors, or preservatives. Like, this stuff is probably healthier than most of what I eat!

Upon reading more about Nutrish on the website here, I learned that the recipe was inspired by Rachael herself, which I can totally see. Something even cooler is that all of her personal proceeds go Rachael’s Rescue, a charity that was created to help shelter pets in need of medical treatments and food.

Even while I was super impressed with the brand and the dog food ingredients, I was still skeptical as to whether Charley would eat it. He’s such a little weirdo…get this: I have to put out his bowl of dog food for the morning the night before because he won’t eat it right out of the bag. The smell is too strong. SUCH a diva. But, full disclosure, I didn’t air out his bowl of Nutrish. I wanted to see if he liked it or not, genuinely. Before I even set it down, he was interested. 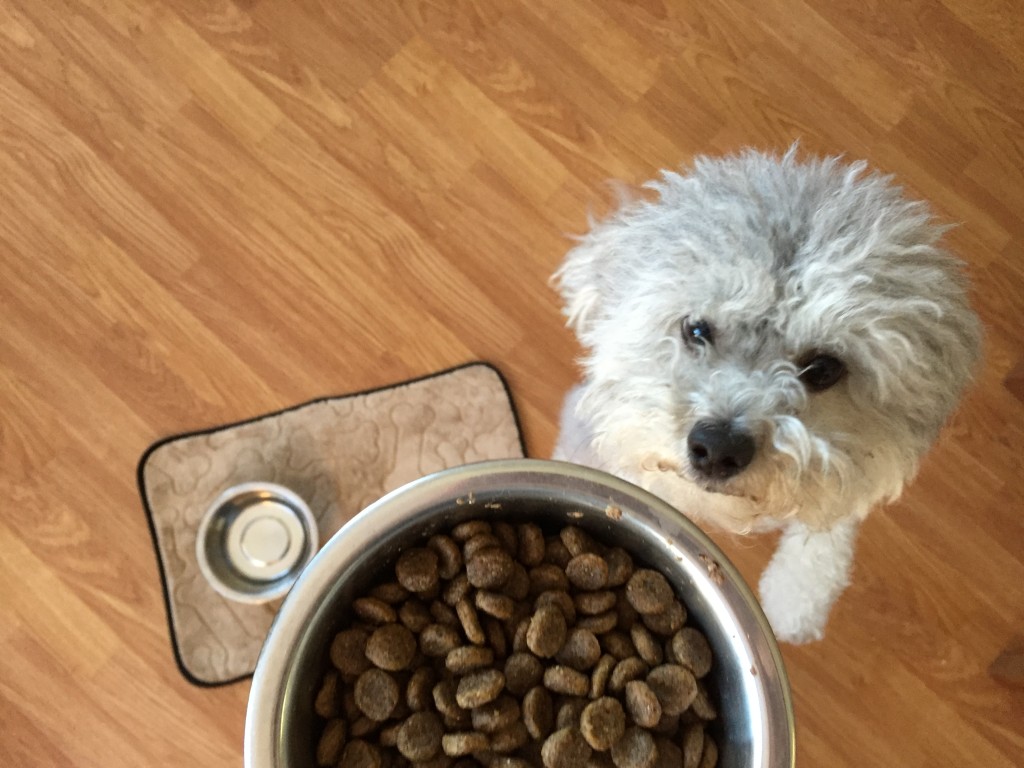 As soon as I set it down, he came over to give it a sniff… 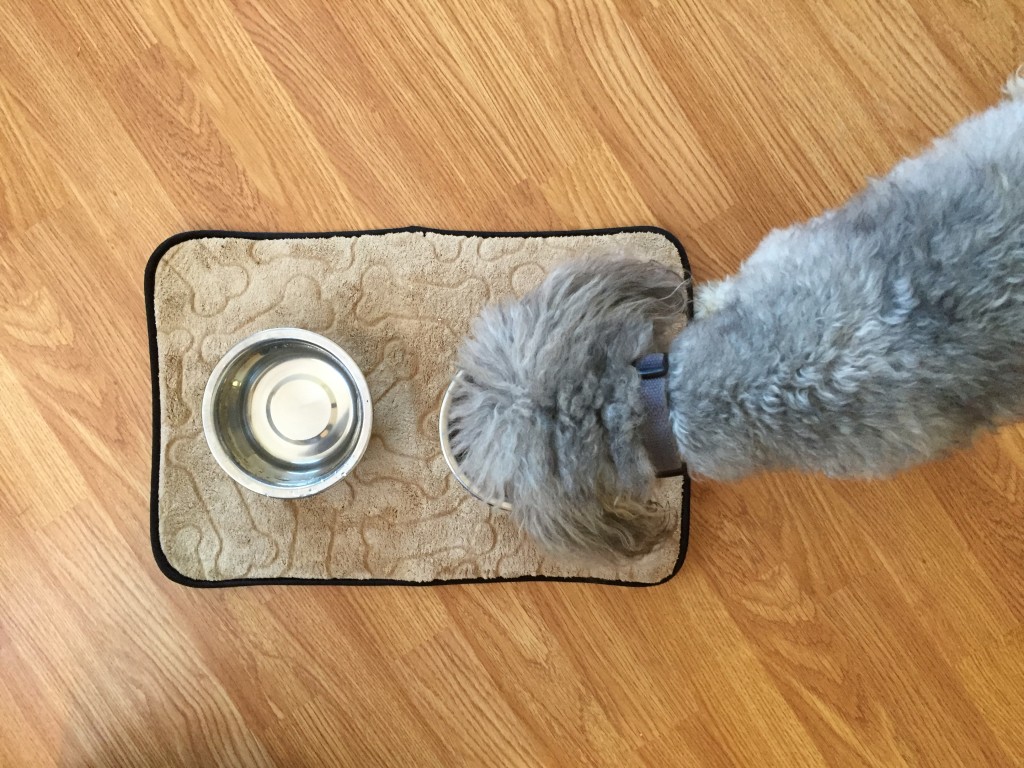 And then he ate it. ALMOST THE ENTIRE BOWL. I’m not being exaggerative when I say that he has never eaten his bowl of food right away. Ever. (Again, we revisit the pickiest pup in the world!) 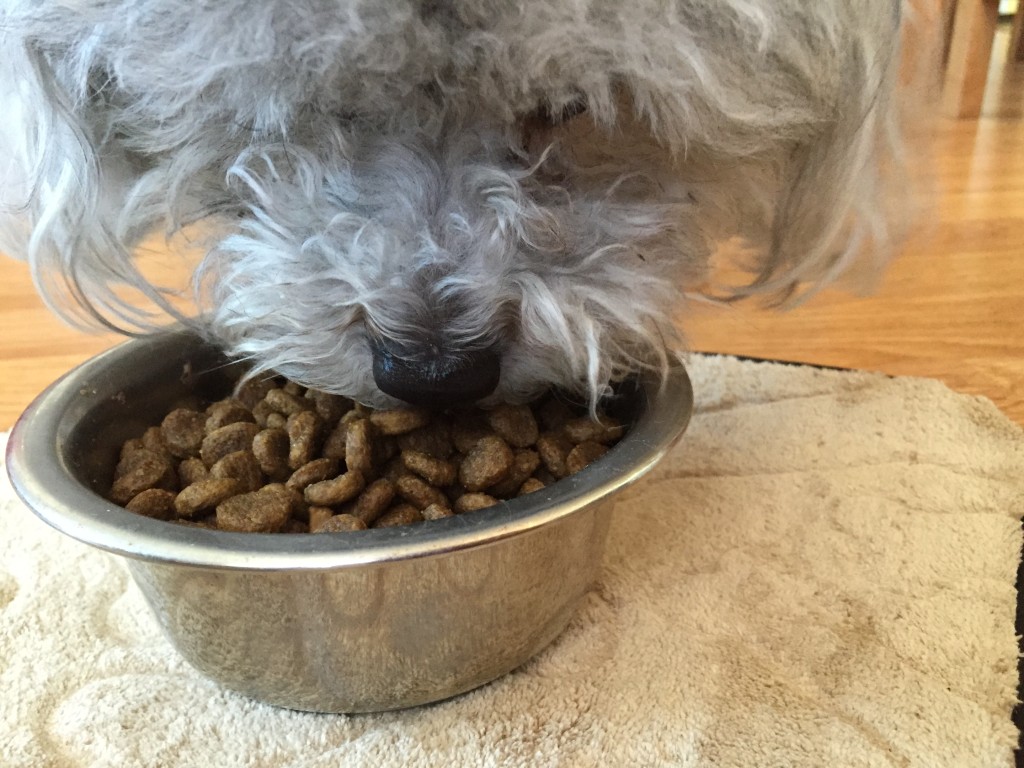 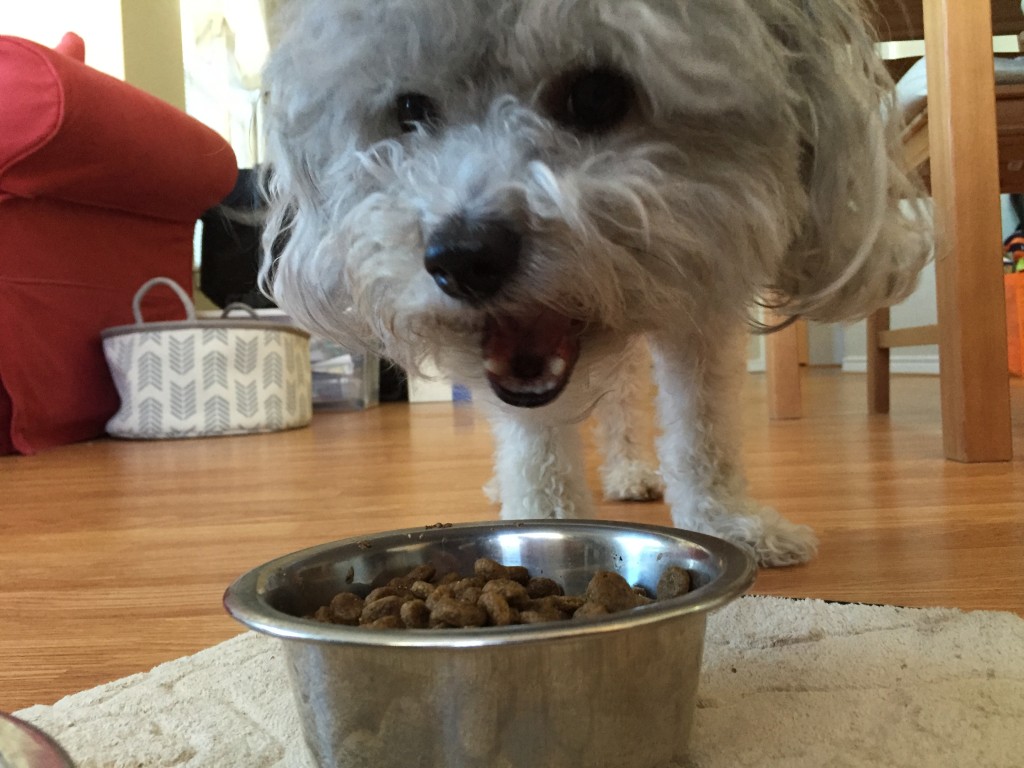 Now, I can’t ask him directly, but dare I say? He loved it! Color me surprised, I really didn’t know how he would react. This puppy mama’s heart feels good about upgrading his food to something he actually loves, that’s wholesome and nourishing, and for my sake, easy to find and purchase. If you’re interested in your dog (or cat–there’s a line of cat food, too!) trying Nutrish, you can buy it at Target, Walmart, or Amazon (check out those awesome reviews!)–and grab this $3 coupon before you buy it! For more information, check out Rachael Ray Nutrish’s Twitter, Facebook, and Instagram.

This is a product that I will genuinely continue to purchase. I love that I can buy different flavors/recipes (like chicken or lamb) while maintaining the quality that both Charley and I love.

3 |Put Charley To Bed In His Crate

For the first year and a half of Charley’s life, he slept with me in my bed every single night. I absolutely loved cuddling with him and waking up to his little puppy snores! However, after Riley and I got married in July, we shortly realized that there was just not enough room for me and Riley and Charley Bear in our queen-sized bed. Even more than that, we also started to notice that he was more tired during the day, and attributed it to him waking up frequently throughout the night as Riley and I tossed and turned. I definitely didn’t want a sleep-deprived pup, so we made a change.

Knowing that he has become more independent, and doesn’t have the separation anxiety that he used to have, I decided to start putting Charley to bed in his crate at night. The first few nights, I would have to physically put him in his crate, but now, he puts himself to bed around 10:30pm every night. (It’s the cutest, sweetest thing in the entire world!) His crate is still in our bedroom, so he’s not secluded from us, and he stays in his crate, so we don’t have to lock it shut. 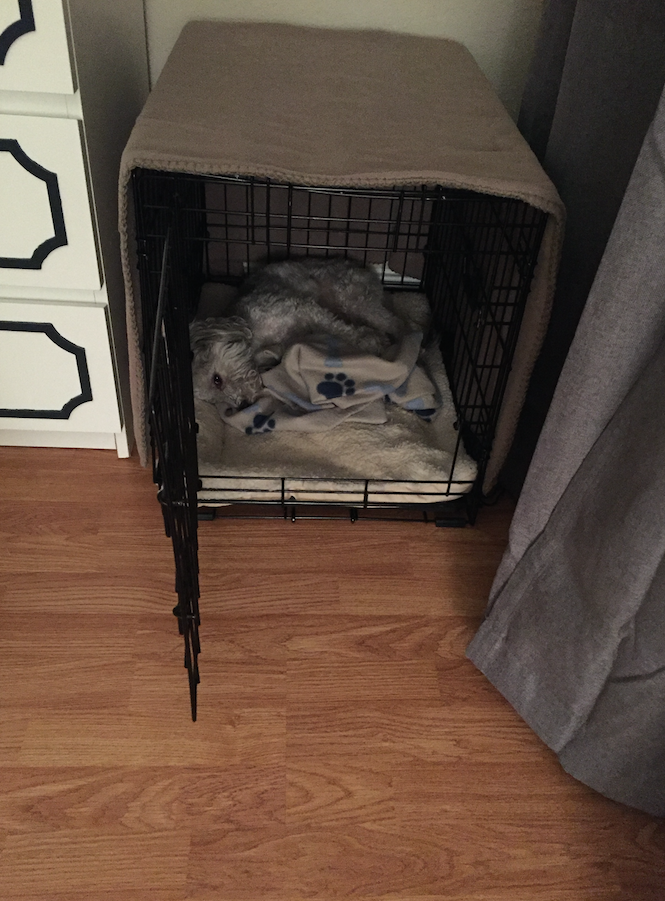 He just heads into the bedroom when he starts getting sleepy, moves his blankie around, and then cuddles up for the night. He never gets up until our alarms go off in the morning, and we’re all getting a better night’s sleep now.

I tried to put Charley in his crate at night when he was a puppy, but he had none of it! He would whine and cry for hours until I would be so exhausted that I would cave in and let him sleep in my bed. Just another example of my little guy growing up! He’s such a big boy now 😉 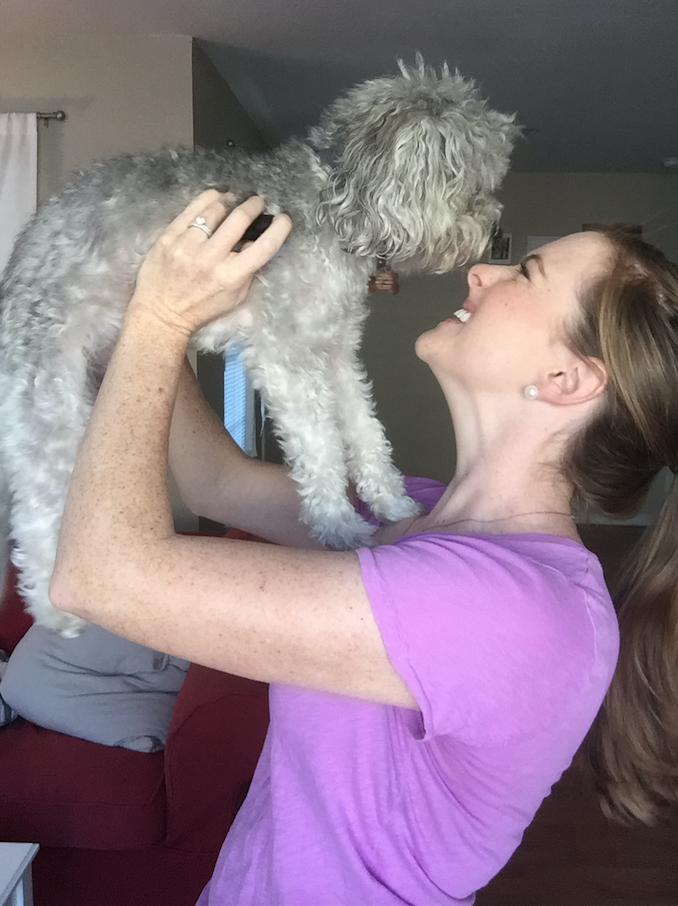 So, reluctantly, and with tears in my eyes, I am finally accepting that my Charley is moving on from puppyhood into doghood. I mean, he just turned 14 in dog years! 😉 A teenager! These three changes have been positive ones as far as adapting to his life stage as well as keeping him happy and healthy. If you raised a puppy, when did you realize he wasn’t a puppy anymore? Did you make any changes in your household to keep your little one happy and healthy? What were they?