As a part of my New Products and Branding class this semester, I have been reading Brewing Up a Business by Sam Calagione, founder of Dogfish Head Craft Brewery. This book is as authentic and genuine as they come, packed with entrepreneurial insight and heartfelt advice. 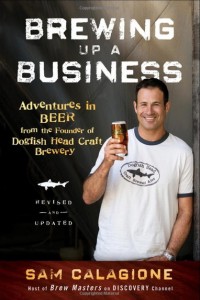 Though I have never met him, I would imagine that Sam Calagione speaks much in the same way he writes–directly and honestly, with a dash of humor. In one of his early chapters, Calagione writes:

“I’m sure that majoring in business or getting an MBA gives you more tools and familiarity with the mechanics of business. But tools are useless unless you are able to use them. You could have the best set of tools in the world, but if you are not ready and capable of working with them they are useless to you. If you believe in your idea enough to make it happen, it must be a powerful idea. The way you harness the power of that idea is to believe you are the only person capable of making that idea a reality. Once you have this mind-set, you will see that a set of tools is not what builds a strong company–it’s the builder.”

Those words affected me in a way I didn’t expect. I found myself re-reading them several times. Highlighting, then underlining. Pondering his words.

What Calagione is saying here is so powerful because it’s more than a note of encouragement or a little motivation–it’s the raw truth. He is speaking to me, his reader, and saying “Blair, it’s fantastic that you’re going to graduate with a business degree from a good school. But what are you going to do with it?”

I think that what Calagione is getting at is this: we each have a set of tools that can never be defined to a degree or an internship or a job. We have innate strengths (and weaknesses) that are more powerful and mountain-moving than any degree. Why? Because our ideas, our drive, and our strength are what change things. A piece of paper can do nothing but blow in the wind, but a person with an idea and the refusal to give up can change the direction of the wind.

An example of Calagione’s idea that “…a set of tools is not what builds a strong company–it’s the builder” is Steve Jobs. Jobs’s humble beginnings putting together computers in his garage would lead most people to believe that his little company would never take off. But Jobs believed in himself far more than anyone else did and has arguably built the best computer company in the world.

Tools are worthless without the person behind them.

In my quest for innovation, I must believe this. Otherwise, I will fail. It’s as simple as that.

A perfect example of this is called lead climbing, a difficult style of rock climbing where the climber places his protection (such as carabiners) as he climbs, and clips himself into this placed protection as he ascends.  Lead climbing is risky because if a climber falls, he will typically drop many feet before being caught by his rope as opposed to top rope climbing, where he would be held immediately by his belayer.

Here is a photo of a man who is lead climbing… 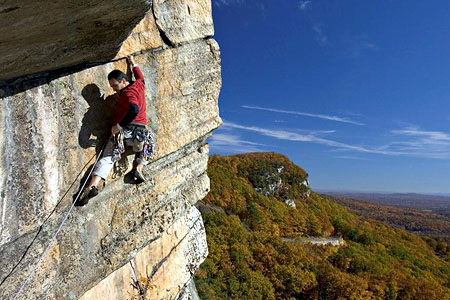 See how the rope is not holding him from the top? He is holding himself as he reaches for a carabiner in his harness to place his next spot of protection on the rock. If his head isn’t in this climb, his equipment and tools are worthless.

He cannot rely on his tools. He must rely on himself–on his own power, strength, and innovation.