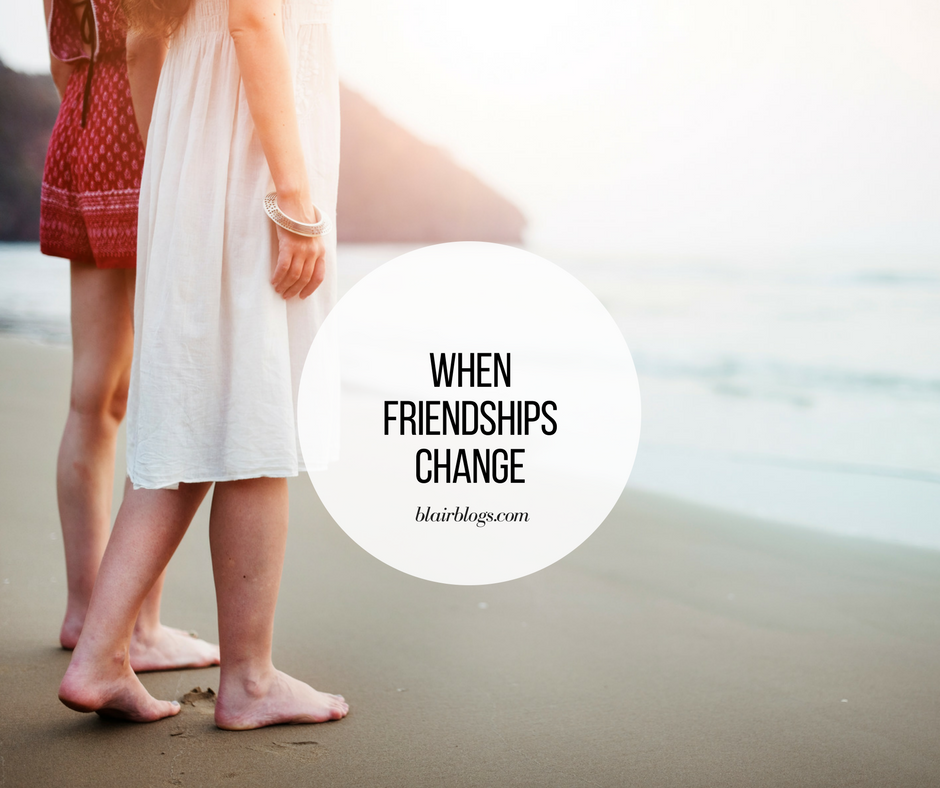 As much as we wish friendships would stay the same, they don’t. Sometimes, they can’t. Friendships change. We change. Our friends change. This can be a good thing, a hard thing, or a little-bit-of-both thing. When I shared that I was working on writing this post on Instagram a few days ago, I received almost a dozen messages from other women who had also experienced changing friendships. If you can relate, you’re not alone.

“We just fell out of touch.”

It’s no one’s fault. Life is just “so crazy.” And that woman you deeply knew and trusted, who has seen you cry and knows your story and the way your car smells, suddenly–or maybe slowly–she’s no longer a part of your circle. Left in her place is grief, confusion, a handful of what-ifs. You still refer to her as your friend, but really, she was your friend, and now she’s not.

“We had a huge falling out.”

Or maybe there was a falling out. A misunderstanding. Words twisted and changed, anger and resentment built up. Distrust, hurt, disbelief. A conversation and years of loyal friendship are unraveled and finished. In your hurt, in her hurt, there’s no follow-up. You can’t seem to choose humility or “the high road,” whatever that is. Time passes, and it becomes clear that there won’t be reconciliation. The friendship is over. Could this have been prevented?

I’ve had this happen, and when I tried to clean up the mess, it exacerbated the situation further. Sometimes a friendship is damaged beyond human repair.

“We don’t live close by anymore.”

Sometimes friendships change because of physical distance. Unfortunately, this reality has been the loudest part of my story. Moving from my hometown to college, from college to Austin, and from Austin to Gainesville–I know this journey all too well. The well-meaning “We’ll keep in touch!” is a nice thing to say, but a much harder one to realize. I’ve seen it a dozen times. So many times, in fact, that I’ve become rather jaded about it.

Friendships don’t stay the same when physical distance is put between friends. They just don’t. Without girls’ nights and coffee chats and shopping on Saturday afternoons, the lack of overlap becomes big and difficult to overcome–and increasingly so as life moves forward and you’re apart. You don’t know the same people anymore. You don’t go to the same places anymore. You don’t do the same things anymore. Now what?

There’s a strange web of mixed emotions like annoyance, jealousy, disconnect, sadness, frustration, and insecurity that begin to poison the friendship, or at least make it increasingly more challenging to connect. With less in common, there’s more to overcome.

“She doesn’t care about our friendship anymore.”

Then there’s the one-sided friendship. Both people were highly invested at first, and then, for one reason or another, only one is. The invested friend feels confused, lonely, empty, and a little angry–and the uninvested friend isn’t sure how to break off a friendship gracefully without a heavy dose of drama.

It’s either “What the heck happened? Why doesn’t she care about our friendship anymore? Did I do something wrong?” or “How do I end this friendship without making it out to be a breakup? Is there a gracious way to walk away? Should I just let it fade over time?”

Why don’t we talk about it?

I have spoken with almost every one of my close friends about breakups within the context of romantic relationships, but very few about “friendship breakups,” so to speak. It’s tempting to write this off and think it’s because friendship breakups don’t happen, but you and I both know that’s not true. They do happen. For any number of the reasons above, and for a thousand other reasons not mentioned.

There’s almost an air of shame around changing or struggling friendships. I rarely hear it acknowledged, and when I do, it’s “We just grew apart.” (I’ve heard these words out of my own mouth many times.) But the “We just grew apart” is only the outermost layer, as you and I both know. Beneath it there is usually hurt, pain, sadness, confusion, insecurity, and distrust–just to name a few.

How to cope with a changing friendship

There’s no manual on this, and I don’t intend to write one. Each relationship is unique and there’s no advice that would suit every situation. That’s what makes this so difficult. That’s why we don’t talk about it.

Literally every one of my close friendships has been put through the ringer. Every single one. All because of moving, and many because of other reasons on and off the list above, too. I’ve experienced a full range of emotion surrounding each friendship that’s changed, or fizzled out, or ended abruptly. I’ve walked through dark and heavy grief that sometimes swells back up on lonely days. You too? You’re not alone.

To fight for friendship or let it fizzle?

I could tell you to fight for every friendship! and find a way to stay close! and put in all the effort! and push into the difficult conversations!–and I think I’d be right some of the time. But the harsh, difficult reality is that some friendships change and there’s nothing we can do about it. When I moved out of Austin, every one of my Austin friendships changed. The people I got coffee with, who I worked with, who I went to Bible study with, who I prayed with, who I spent all my time with? We’re now 4+ hours apart. Sure, we can put in the extra effort to stay in touch, but it’s not the same and never will be. (The grief surrounding this is so big that I could write a whole post on just it.)

All that said, for those friendships that can be salvaged, that can be restored, that aren’t out of your control–I encourage you to fight for them. True, trustworthy friends are rare indeed. Have the difficult conversation, be the first to break the silence, take steps towards reconciliation. Two of my very best friends and I have walked through rough patches of our friendship, dark days when we were distant and hurt. In both instances, we had the hard conversation, forgave each other, and moved forward. Though both live across the country, our friendships remain strong and close-knit.

If you’ve struggled with changing friendships, you’re not alone. It’s confusing, challenging, and emotionally trying. Let us move forward with grace and truth, seeking closeness and reconciliation when possible, and finding acceptance and peace when it’s not.

// Have you experienced a changing friendship? 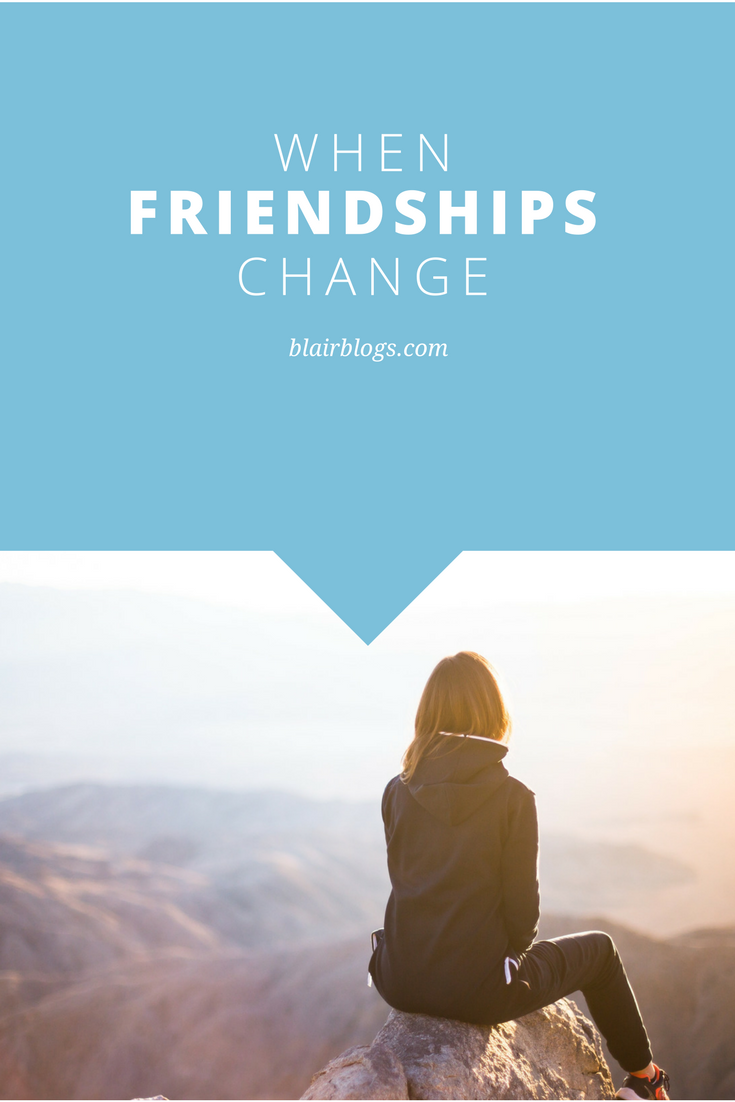