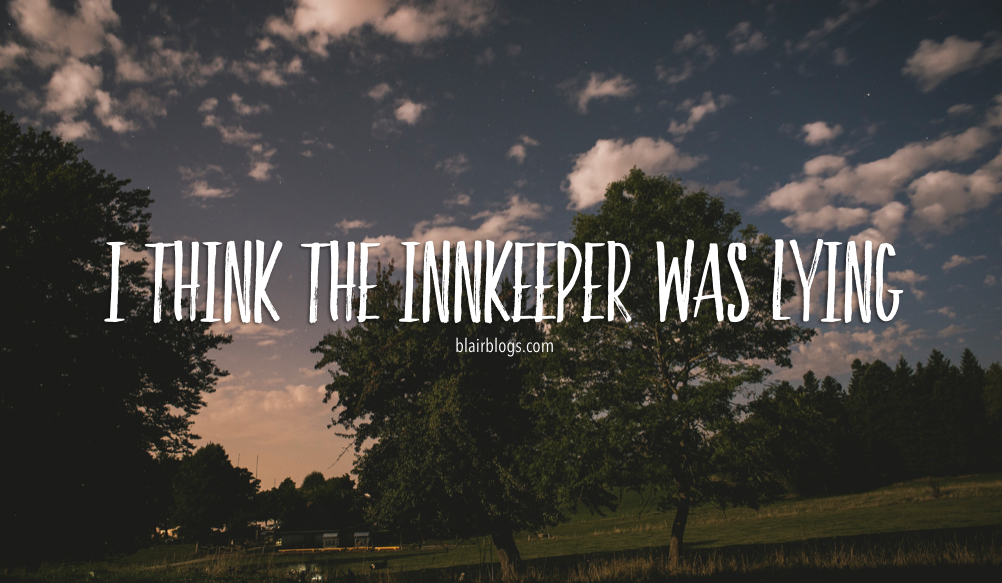 This post is a repost from the archives; it was originally published on December 24, 2013.

You know the innkeeper? The one who told in-labor Mary and surely-frazzled Joseph that there was no room at the inn? The man who sent the Messiah to be born in a stable? Well, I think he was lying.

“And she brought forth her firstborn son, and wrapped him in swaddling clothes, and laid him in a manger; because there was no room for them in the inn.” -Luke 2:7

I think when dirty, traveling foreigners showed up and one of them was in the late stages of labor, moaning and loud, the innkeeper didn’t want to deal with the pair and the noise of the labor and the mess it would create. I wouldn’t either.

And I think that even if he hadn’t technically been lying about space in the inn, I don’t believe for a second that he couldn’t pull some strings…move some people around…give up his own room. He didn’t want to. I wouldn’t want to either.

I also think that by sending the pair and Mary’s almost-born son outside, the innkeeper could avoid all the drama and mess and get back to sleep on that first Christmas Eve. Would I have done the same thing?

The innkeeper–he’s such a hugely significant character that gets underscored time and time again. But I can relate to him. Because, really, we’re all like him.

I don’t want to follow Jesus because He’ll make me rearrange my plans.

I don’t want to follow Jesus because I’ll have to change my life.

…because there’s no room for Him here.

When will You say that? When will I?

There is room for You here, Jesus.

I want You here, Lord.

I will change plans and my life if it means You’ll stay.

I desire to give up things I love because I know You’ll replace them with something better.

This Christmas Eve, thousands of years after the very first one in Bethlehem, we are a bunch of lying innkeepers, telling Jesus there’s no room for Him. Let’s make room together–not for the commercialism and the gift-wrapping and the food-making and the house-cleaning and the headaches–no, let’s make room for Christ.

For the life-changing, all-knowing, wildly-loving, transformational power of Love. Because–did you hear? The Savior–yes, the Messiah, the Lord, will be born [tomorrow] in Bethlehem! (Luke 2:11, revised)

“All of us is an innkeeper who decides if there is room for Jesus.” -Neal A. Maxwell