There is a new line of blog posts rolling out around here, all centered around one thing: fakecations. (Fake vacations!) Let me give you a little backstory: I love to travel. About twice a week (sometimes more frequently), I will get an idea in my head of a city Riley and I should visit and will then spend hours upon hours “planning” our trip…that we likely won’t take…and can almost never afford. Sometimes I wonder if I should’ve been a travel agent like I dreamed of being as a kid (this was after I dreamed of being a marine biologist but before my I-want-to-be-a-teacher stint).

One evening, about two hours into knee-deep research revolving around a charming Canadian getaway (oh, it would be so much fun!), I decided that I should probably blog about some of these fakecations if I’m going to spend so much time dreaming them up and planning them. 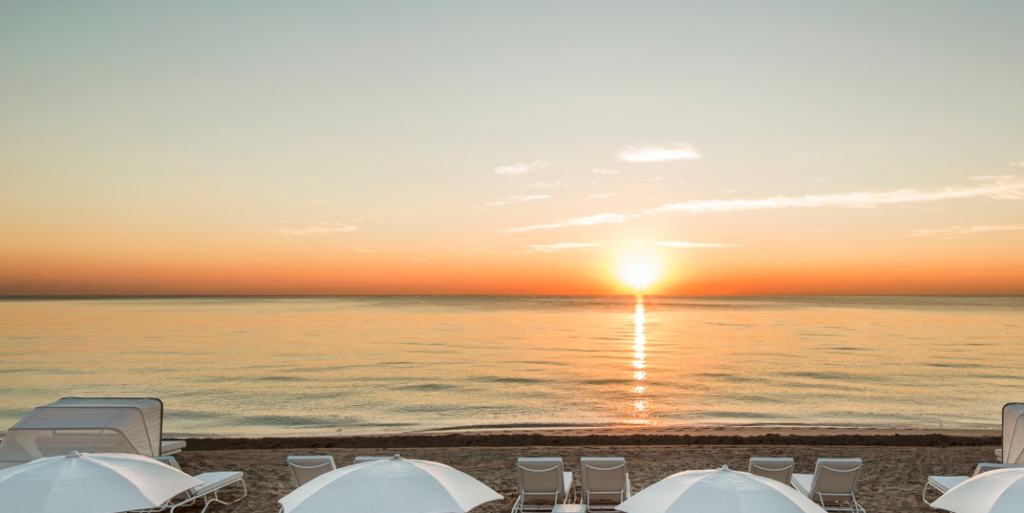 Today, I’ll kick off my fakecation post series with a trip to Miami, Florida! I have been to Miami before (Riley has not), but it’s been about nine years. I remember loving the sunshine and beautiful beach views along with the relaxed vibes of the city. (I also vividly remember some very delicious meals!) Other than that, I really don’t recall much about the few days I spent there. I would absolutely love to go back and explore the city with Riley! Now, let’s get to planning 🙂

Because the coldest month of the year in Texas is January, I would want to take a warm-weather getaway sometime around then. #ihatecoldweather January is too close to December travel, though, so I would plan to jet set to Miami in late February to give our suitcases a break. (It could be a belated Valentine’s Day trip!) For the purposes of this fakecation, I would leave Texas on Friday, February 26th and return on Monday, February 29th! (2016 is a leap year!) A little four day/three night stay in a place where the February high is 78 degrees sounds perfect to me.

We have the privilege of living about 45 minutes-1 hour from two major airports: Dallas-Fort Worth (DFW) and Dallas Love Field (DAL). This is awesome for the sake of options, but unfortunately, given Texas’ size, almost any flight out of Texas is expensive! That’s the downside of living in a state that’s nearly a country. I was able to find reasonably priced flights for this trip, though. 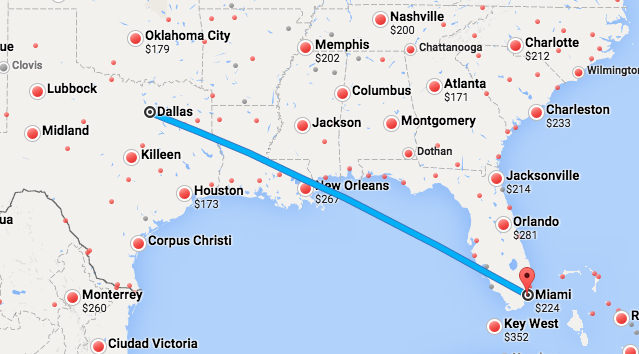 If we flew American Airlines, we could take a flight out of DFW on Friday afternoon and get to Miami (MIA) around 8:45pm. On Monday, we could depart Miami in the early evening and get back to Texas around 10:30pm, giving us about three full days of sunshine. (See which flights I’d book here.) These roundtrip flights cost $224 a person, so the total for flights would be $448.

Because our hotel would be just 12 miles from the airport, and would be centrally located, we wouldn’t rent a car. City driving is one of my least favorite things in the world, not to mention the cost of renting a car, the cost of parking it, and the added stress of finding parking in a city we don’t know well. Instead, we’d use Uber to get around, saving money and stress. (If you sign up using my Uber link, both of us get a free ride!) Anyone else hate navigating through new cities by car? My mom and high school best friend both love new city driving…but I can’t think of anything worse!

If I’m going to a city with a beach, I want to be as close to the beach as possible. (If I were the camping type, I would pitch a tent right in the sand! Heck, even without being the camping type, I’d sleep in a tent on the beach!) With that in mind, I searched and searched for a hotel with an oceanfront view. I also wanted the hotel to have a great pool and be in a good location. As soon as I saw the Metropolitan by COMO, I was sold. Who wouldn’t be?

With just 74 rooms, the Metropolitan is considered a boutique hotel. Its décor is really beautiful, the pool looks gorgeous, and most importantly, it’s situated right on the beach! According to TripAdvisor, it’s the #2 best hotel in Miami! 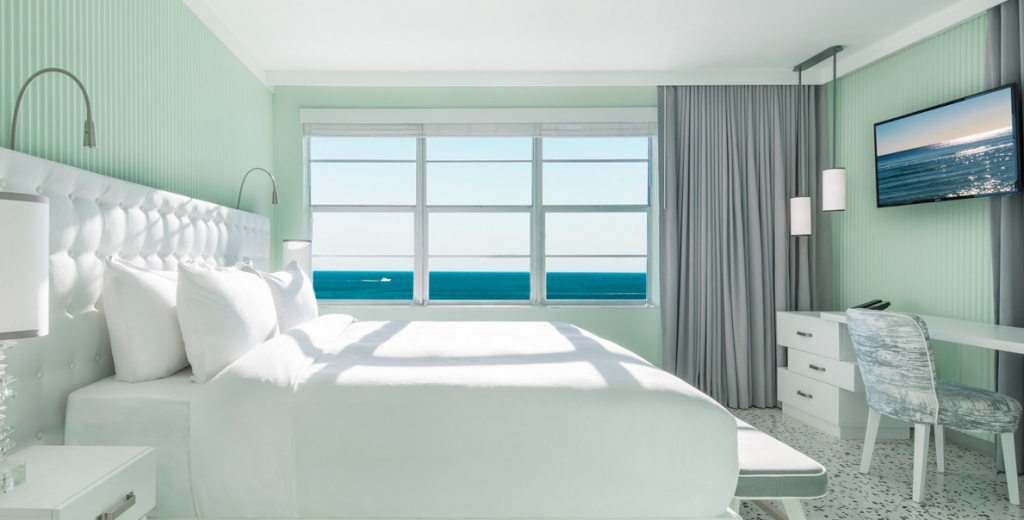 For $554/night over the nights I mentioned above, it is not cheap, but the price could be worth it for the hours we would spend by the pool or on the beach, the amenities, and its close distance to the city center. (I feel like I’m the narrator on House Hunters!) The total for three nights in this gem is a hefty $1,662. (Do you see why this is a fakecation? 😉 )

Since we wouldn’t get to the hotel until 9:30 or 10:00pm on Friday night, and we’ll likely be very tired from traveling and working all week, we would save the city exploring for Saturday, Sunday, and Monday. On Friday night, we’d check into our hotel room, freshen up, and then head down to the hotel’s gorgeous Art Deco bar–Traymore Bar, for cocktails and appetizers (I’ll estimate $45 for that). After that (if we’re still awake!), we’d walk out to the beach and put our toes in the sand, which is one of my favorite things to do in the world. 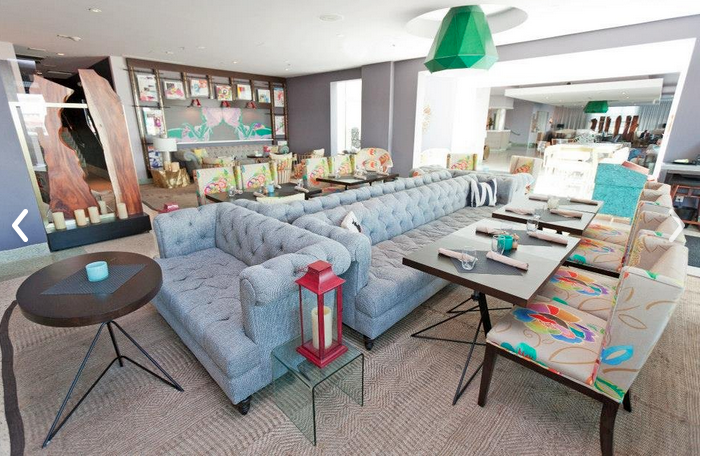 Saturday morning would be the best–tell me, is there any better feeling than waking up at the beach?! We’d walk 15 minutes (taking the beach as our route, of course) to brunch at The Social Club. Eggs benedict and a watermelon mimosa anyone? This place looks delicious and I love the décor! Riley and I both love leisurely brunch–sipping coffee, laughing, enjoying the morning sunshine. I’ll estimate our bill to be $50, including tip.

After brunch, we’d likely head back to the hotel, get into our suits, and go find a spot by the pool or in the sand to soak up the sweet Miami sun and swim in the refreshing pool or ocean! Some hours later, maybe around 4:00 or 5:00pm, we’d take showers, and I’d put on a sundress, and we’d head out for some early dinner. 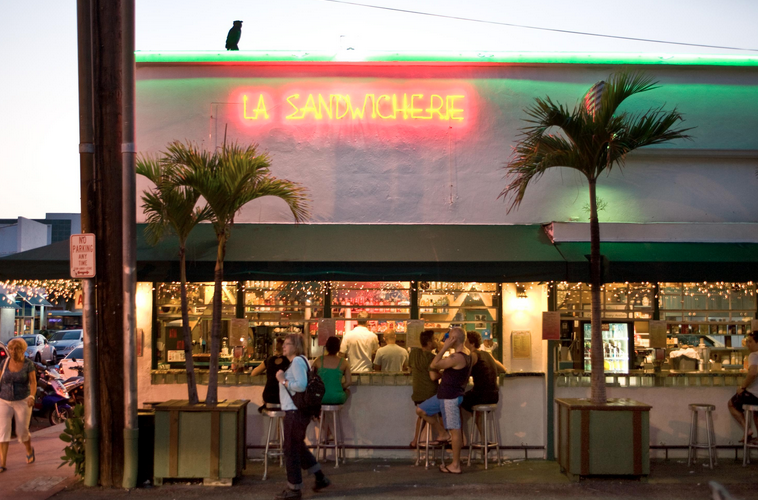 For dinner? La Sandwicherie. Because the reviews and photos of the food are insane, and we could walk there quickly, in just 15 minutes. Plus, we both love to people watch, and it’s street-side location makes it the perfect, casual joint to relax, eat, and watch people. I estimate that we’d spend about $20.

After that, we’d grab a ride to a sunset cruise, which includes drinks. The one I looked up (through this company) is $59/person, so it would set us back $118.

After getting back from our cruise, we’d be just eight minutes away from downtown Miami. A great way to end our night would be to head downtown, shop, walk around, people watch, and grab a drink…maybe Touché, which has a rooftop lounge (heart eyes)! I’ll estimate $40 for this.

On Sunday morning, we’d take an car to grab breakfast at Under The Mango Tree, where we could grab some coffee, a smoothie, and a breakfast bowl or sandwich. We’d likely spend about $20.

Because our breakfast spot is right by South Beach, we would walk around the area, stroll the beach, shop, and generally waste time exploring. (This is one of my favorite things to do on vacation!) Assuming we’d find a couple of things to buy, I would budget about $50 for this afternoon.

After an afternoon of exploring, we’d grab an Uber and head up to Lapis Spa for a couple’s massage, which will relax us completely, but set us back $420, including tip. After our spa treatments, we’d want to shower and relax, so we’d walk down the street to our hotel.

For dinner on Sunday night, we’d get a ride and go to grab some pizza at Visa-O1 because, apparently, it has the best pizza ever. (It’s the #1 rated restaurant in Miami–dang!) After dinner, we could grab dessert or drinks (or both!) at a local place, or head back to the hotel and enjoy its amenities. I’ll estimate that dinner and drinks/dessert will set us back about $75.

Our flight would depart around 5:00pm on Monday, so we’d only have until 2:00pm or so before we’d have to pack up, get an car, and head back to the airport.

Because of our shortened time, I wouldn’t plan anything concrete for Monday. I would wait and see if there was anywhere that we wanted to re-visit, or a place that we passed during our excursions that we wanted to try. Even though I love to plan, I also love to leave at least a day of wiggle room in any trip for spontaneity! Sometimes the unscheduled hours turn out to be the most fun of the entire trip!

Though I can’t precisely estimate our day’s costs, I will budget them to be about $75 for a couple of meals and a little shopping for some last minute souvenirs.

So, there’s my first planned fakecation to sunny Miami Beach! (It reeeeeaaaally makes me want to go ahead and book some flights! 😉 I love the beach!) I should note that this post took me over five hours to write, which isn’t really out of the ordinary, but is much more time than I anticipated this post taking. It took so long because I genuinely calculated costs for each restaurant and excursion based on the menus and actual costs. I also painstakingly calculated Uber fares so that those would be highly realistic as well.

Which city should be next on my fakecation list?! Have you been to Miami? What did you do while you were there? Anyone want to send me about $3,244? 😉