Our world is filled with exclusivity and elitism. There are major barriers to entry in almost every facet of our lives–from the schools we attend, to the airlines we fly, to the organizations we’re a part of, to the trips we can afford, to the clothes we wear. Emphasis, for Abercrombie & Fitch, on the clothes we wear.

This week, the 68 year old CEO of A&F, Mike Jeffries made the following statement:

The people of the internet backlashed like crazy. His words were put over a wide variety of photographs, and generated thousands of comments and reposts. People got mad. Really mad. 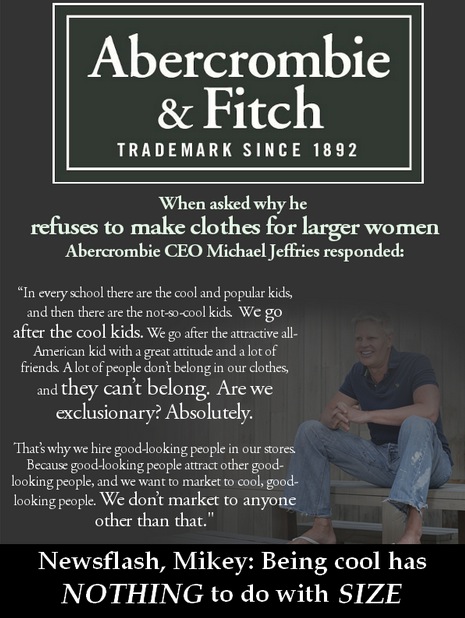 One guy decided to give A&F a brand readjustment for himself. Check out the video below, it is absolutely hilarious. I found myself yelling “amen!”

From a marketing standpoint, being exclusionary is absolutely necessary. Some marketers even say that the most important aspect of a company’s strategy is who they’re not marketing to. Trying to target everyone simply won’t work. It just won’t. Every single successful brand is exclusionary.

That being said, being mean, cruel, and unkind is not necessary in creating an exclusive brand. If A&F was marketing their clothes to precisely their target market effectively, the CEO would never have to make such a statement. The biggest problem I have with the CEO’s statement is his word choice–“they can’t belong.” There’s a difference between “don’t right now” and “can’t.”

If A&F is truly going after the “cool kids” (no one is cool in high school. no one.), why would they also exclude those who aspire to be “cool?” Exclusionary and elitist brands [should] thrive on the fact that they are aspirational. (Again, ethics aside.)

Here’s what I mean: people who can’t afford to purchase a Mercedes or carry a Prada bag or wear designer jeans typically aspire to be able to buy all three. This is what keeps the brands in business. Once those same people who have been aspiring and admiring reach a place where they can afford these exclusive brands, they do. But apparently, according to A&F’s not-so-cool-or-attractive-in-any-way CEO, the “un-cool” kids “can’t belong.” That kind of thinking will not work in the long run.

Do you know who pays your bills?

Additionally, A&F is a middle and high school brand. Sorry buddy, but it’s the truth. Guess who buys middle and high schoolers’ clothing? THEIR PARENTS. Usually, mothers. Guess what? A lot of mothers have birthed multiple children, nursed, undergone treatment for various illnesses, dealt with weight gain and weight loss. These “cool kids'” mothers aren’t all a size 2. *GASP*

They are beautiful, real women. And they’re angry beyond words that A&F’s CEO would be blind enough (read: a huge idiot) to make such an insensitive and blatantly oppressive statement. Check out the comments A&F is getting on their Facebook page.

I haven’t gotten this passionate about a blog post since Bic’s Lady Pens. I’d love for you to join in this conversation. Do you shop at A&F? Do your children? Will you continue to purchase clothing from the store?