On Saturday, I got home from a week-long trip to Dallas with 18 Middle Schoolers and four adult leaders. Since then, I’ve spent a couple of days resting and recovering! (Last night, I went to bed at 9:30pm and got 10 hours of sleep!) Our trip was called a “GO! Team,” and was through my church, Gateway Church in Austin, Texas. Gateway sends several hundred kids and leaders out each summer for a week of serving–we go everywhere from Minneapolis to Dallas to Haiti to Portland to New Orleans to Atlanta to Austin! Kids apply for which serving trip they’d like to go on based on their age…third through fifth graders stay here in Austin, middle schooler go a little farther, and high schoolers go even farther. Pretty cool, huh? Though my job title is Preschool Director, I absolutely adore middle schoolers, so I promptly volunteered to lead this GO! Team trip to Dallas.

These trips are absolutely life-changing for the kids and students who go on them (and the leaders, too!). For many, it’s the first time they’re going away from home at all, let alone going away for a week of serving–not a summer camp or vacation! The days are very long, tiring, and hot, we stay in run-down buildings central to where we’re serving, and we eat cheap, easy meals all week. Again, not a camp or a vacation. Truly a service trip. But we have loads of fun! Below is a photo of the building we stayed in, which is actually part of a church. The building used to be for housing the homeless but is now used for hosting churches like Gateway on mission trips. 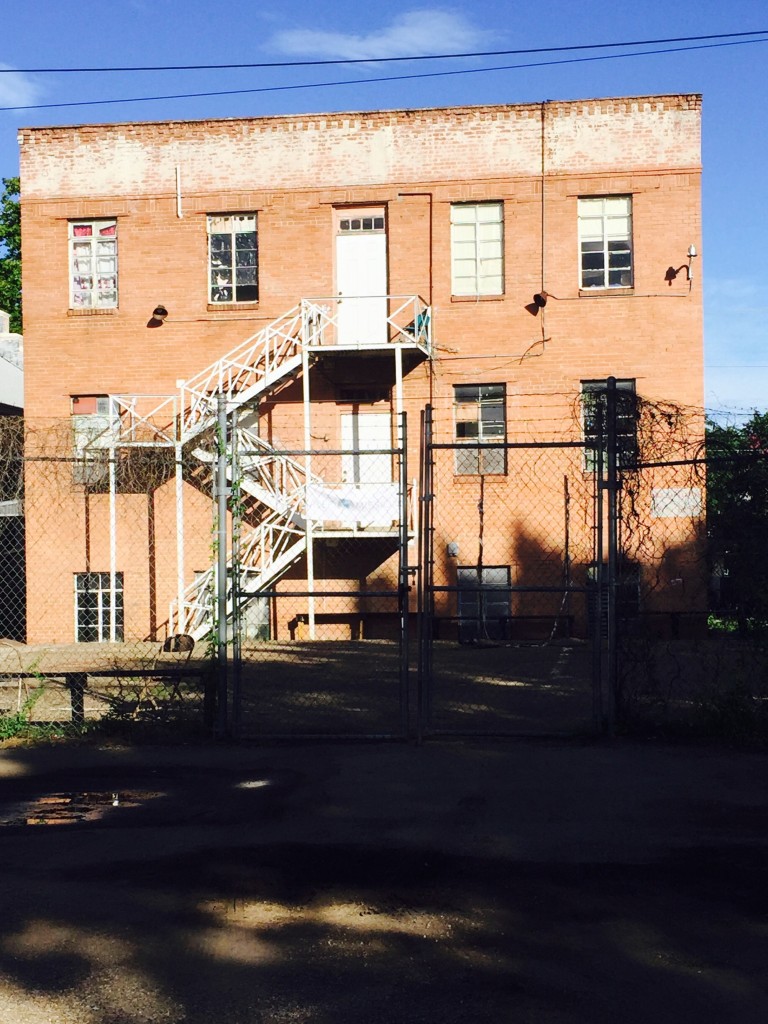 What was first a scary, is-that-place-abandoned? brick building became home for the week! Many memories were made in the dorms, great room, and courtyard here. Just goes to prove that old cliché true–“It’s not where you are but who you’re with that matters.”

Speaking of who I was with, God had a big surprise on His hands for me upon arriving in Dallas! Day one, I walked into the building pictured above to meet up with the hosts of our trip, Ronnie and Jenny (who founded Kaleo, an organization that partners with churches and hosts urban mission trips all over the country), and was introduced to Taylor and Sarah as well. Turns out, both couples attend the same church that Riley does in Denton and Taylor and Sarah are Riley’s small group leaders!! Only God could pull something like that off. Now, when I move, I’ll know five people (these four and Riley)! Here’s a photo of me, Taylor, and Sarah, the couple who leads Riley’s small group. Praise God for new friends! 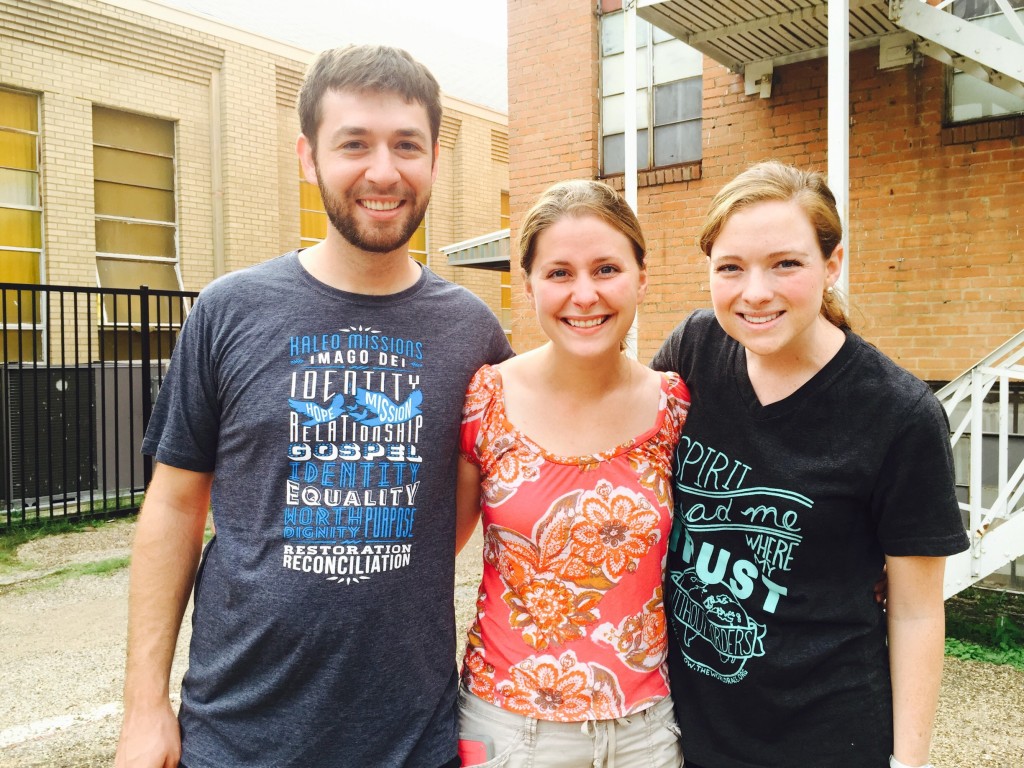 Throughout the week, Ronnie, Jenny, Taylor, and Sarah helped coordinate our team as we served in various locations. Our team of 18 broke into two smaller groups of nine, each with a male and a female leader. I was the team leader and had the unique privilege of bouncing between the two groups, helping wherever I was needed.

Between the two groups, we were able to host two different Bible camps for kids who live in low-income apartments through Vickery Bible Church and Urban Action, serve meals at a large homeless shelter called Dallas Life Foundation, take orders for personal items or clothing from homeless individuals, then fill and distribute the requested items at Our Calling, organize a food pantry and clothing storage facility at the Metropolitan Dream Center, and invite children who live in the most dangerous and impoverished part of Dallas to a Christian day camp through Care Center Ministries. It was quite a week!

Here are a few photos at Urban Action, which is a Bible club/day camp that’s held in a very low-income apartment complex. The club is literally held inside an apartment, which the 86 year old founder has made into a kid’s space, complete with classrooms, an office, and a large group area. The founder, “Grandma May,” is an unbelievable woman. She came to the United States over 50 years ago from South Africa as a missionary and has since created a legacy of love and teaching children about Christ ever since. The first photo below is of Grandma May and Natalie, one of the awesome leaders on our trip! (You can’t see Grandma’s necklace, but it says “I love kids!”) 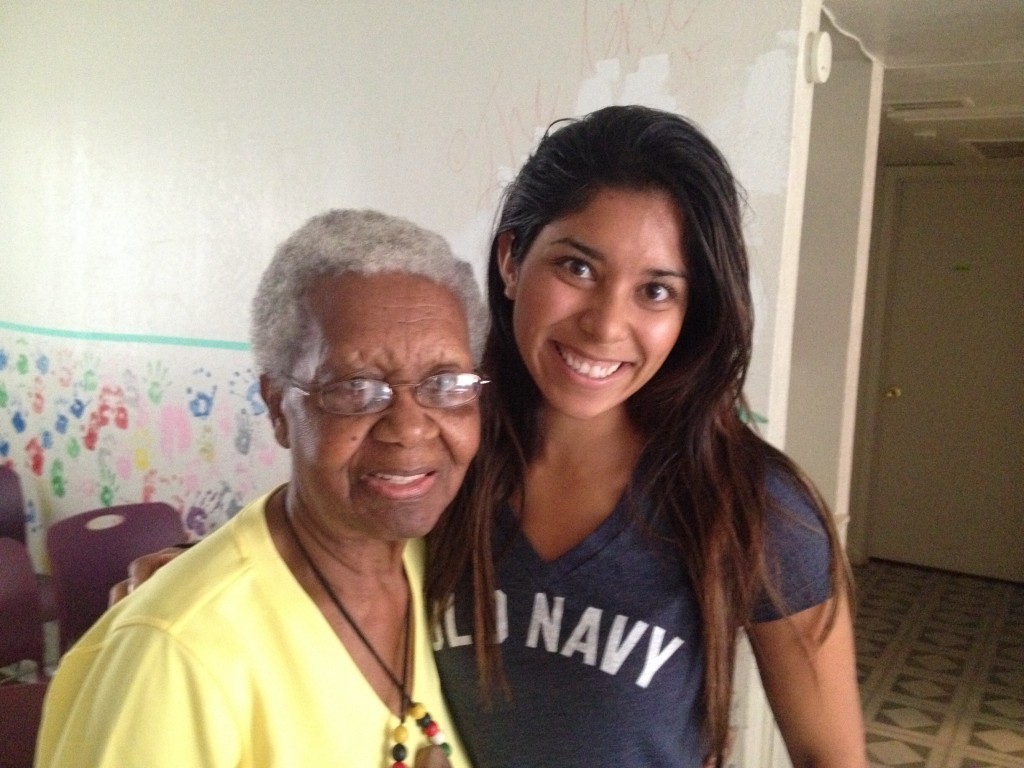 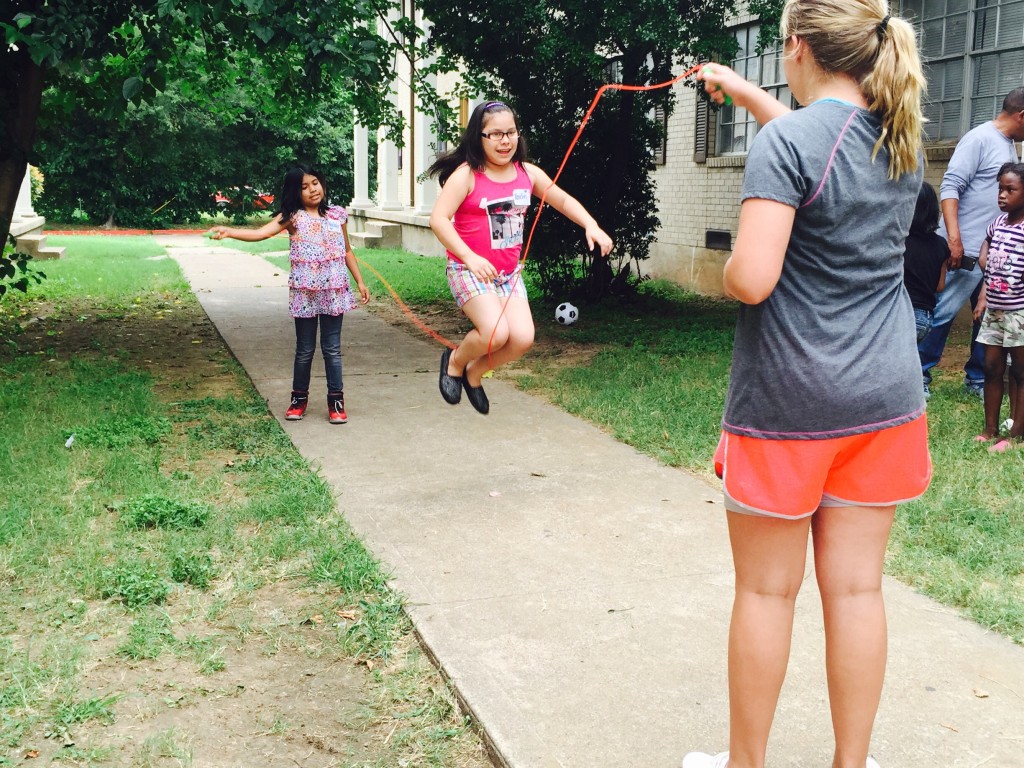 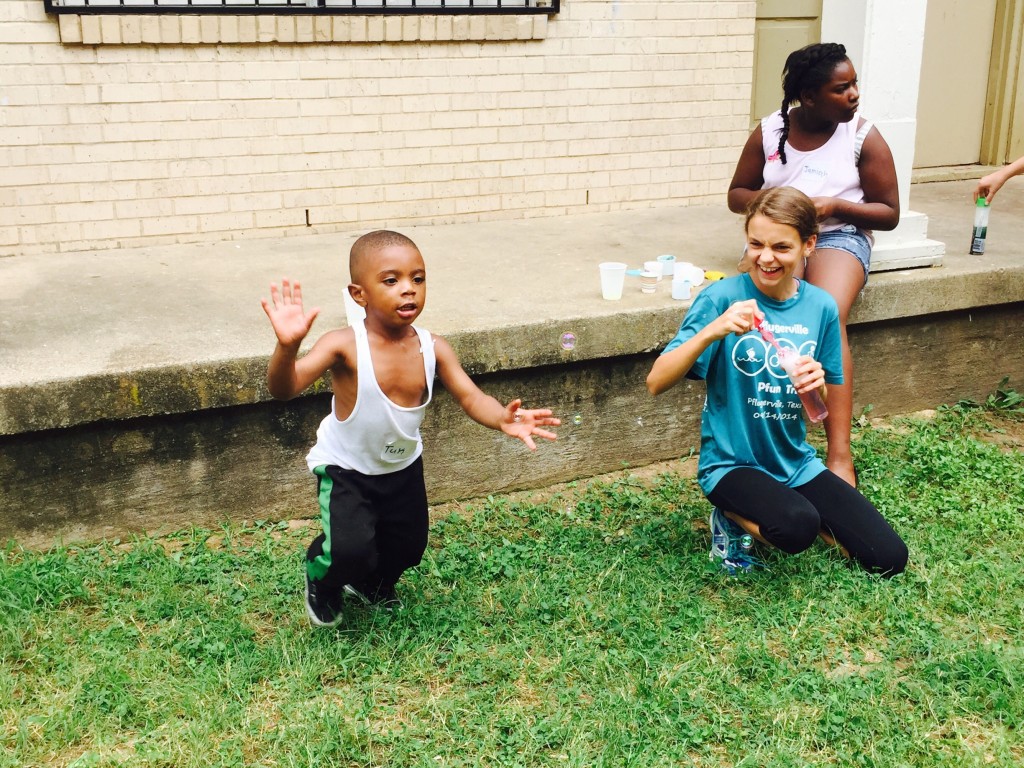 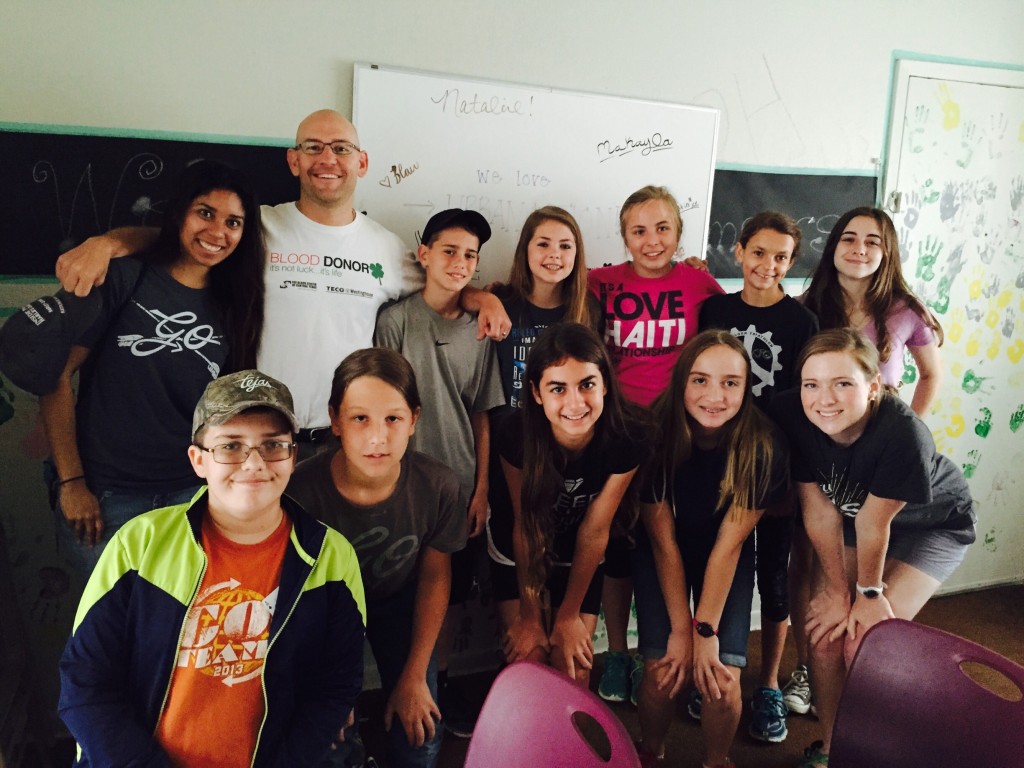 One thing I love about Urban Action is that the group takes weekly field trips to different locations around Dallas. The week we were there, we went to the Dallas Museum of Art! Knowing that many of the kids we were spending time with don’t leave their apartment complex very often made it really awesome to see them explore such a cool place. 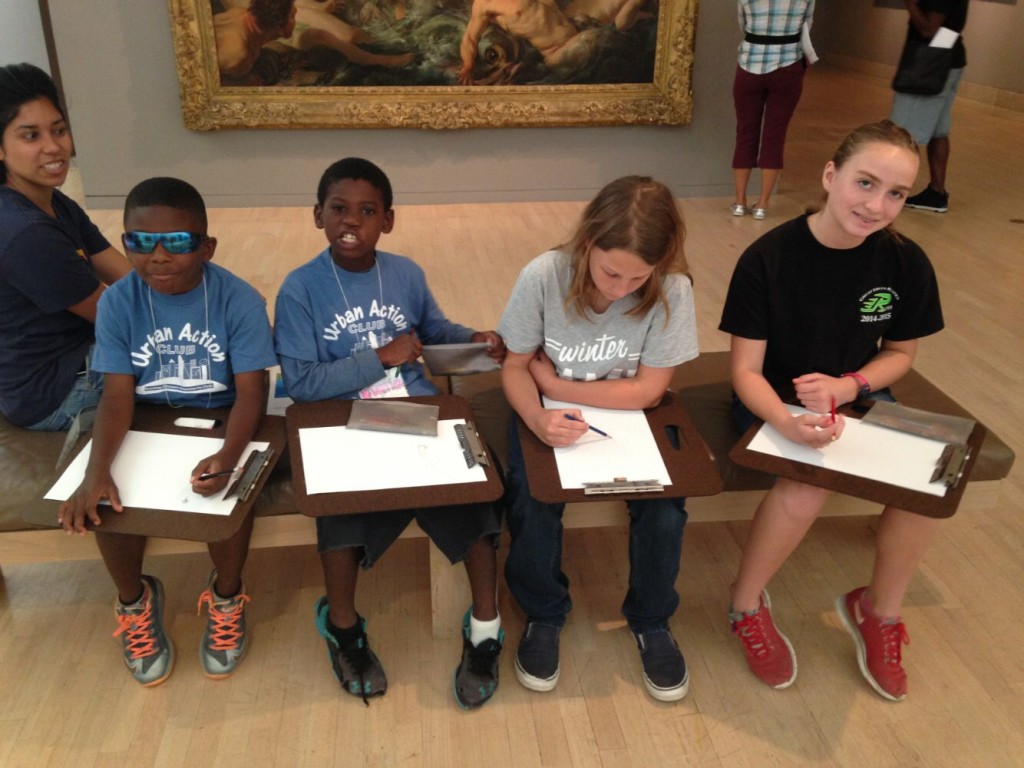 From left to right, this is Natalie, Amonti (who goes by “Money”), LaDarrian (who goes by “Scrappy”), Drex, and Sophia. We were in the Dallas Museum of Art at a neat kid’s station, drawing our own piece of art! I tried to take Money and Scrappy home with me, but I was told I couldn’t! 😉 What sweet, smart, and hilarious boys. Love them.

Another place we served was called Dallas Life Foundation. It’s a massive homeless shelter where residents either have to pay-to-stay or work-to-stay, making it a great place to “get back on your feet,” so to speak. The organization offers meals, childcare, housing, chapel, mentorship, classes, and more. It is truly amazing. Our job was to serve dinner each night! We loved it. 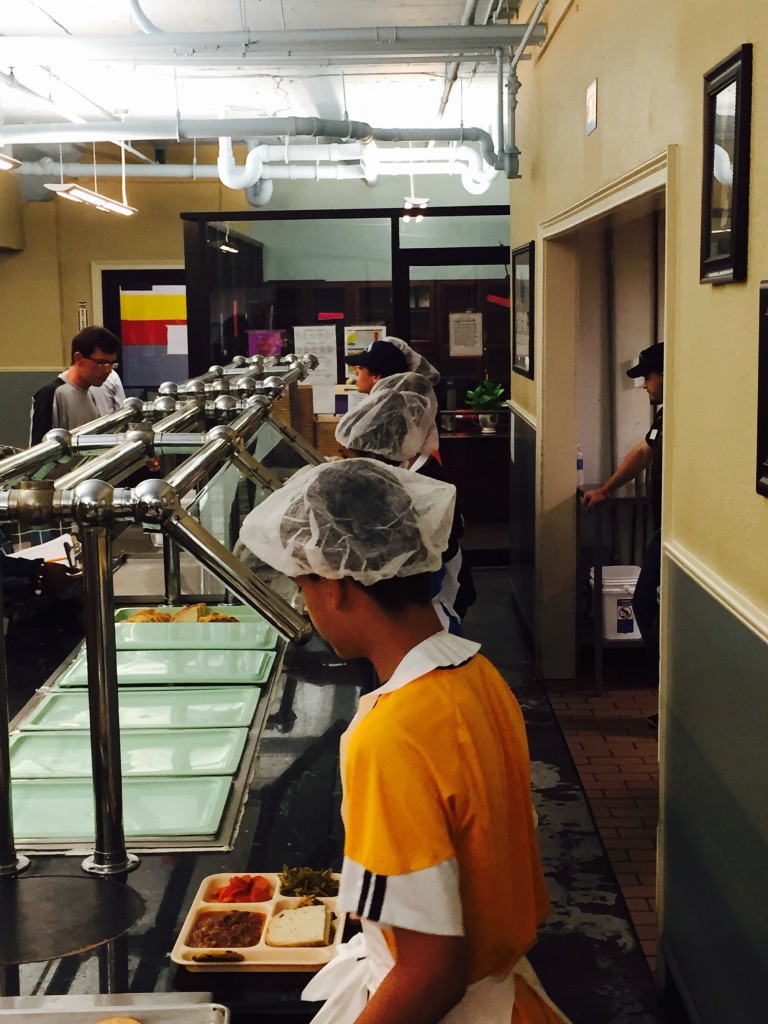 Everyone looks good in a hair net, right? 🙂 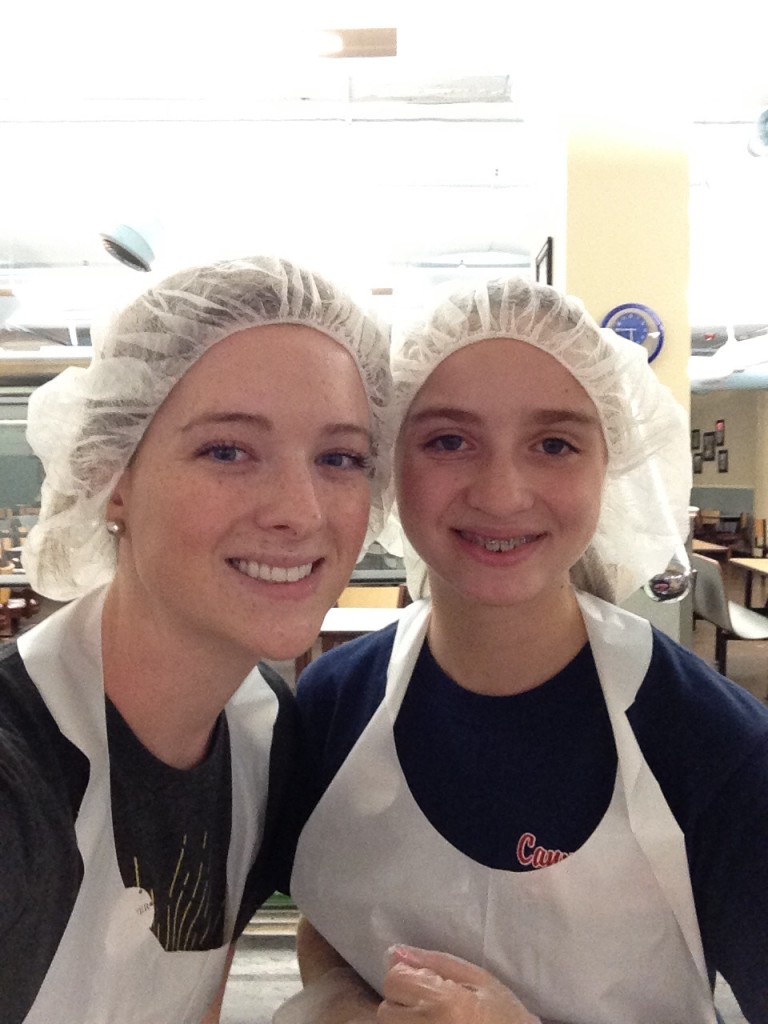 Some of my favorite moments on the trip were those in Dallas Life Foundation. The students with me were so full of compassion and joy that they frequently left their post behind the line to greet, hug, chat with, pray for, and even dance with the residents! Below are two photos of exactly that. 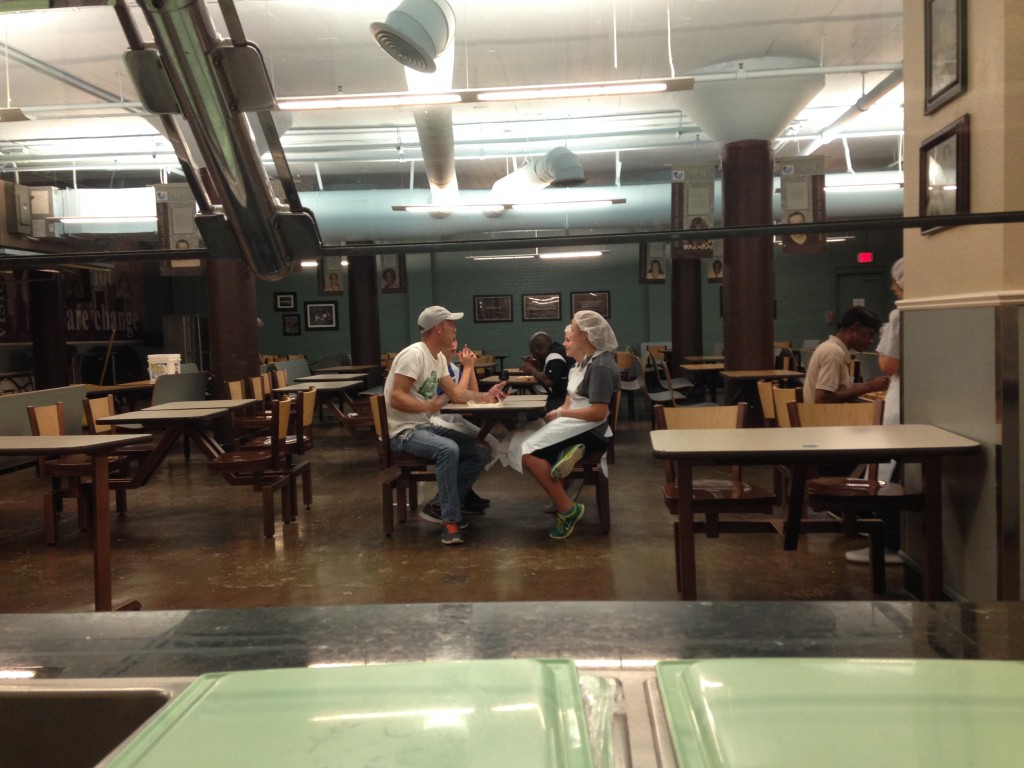 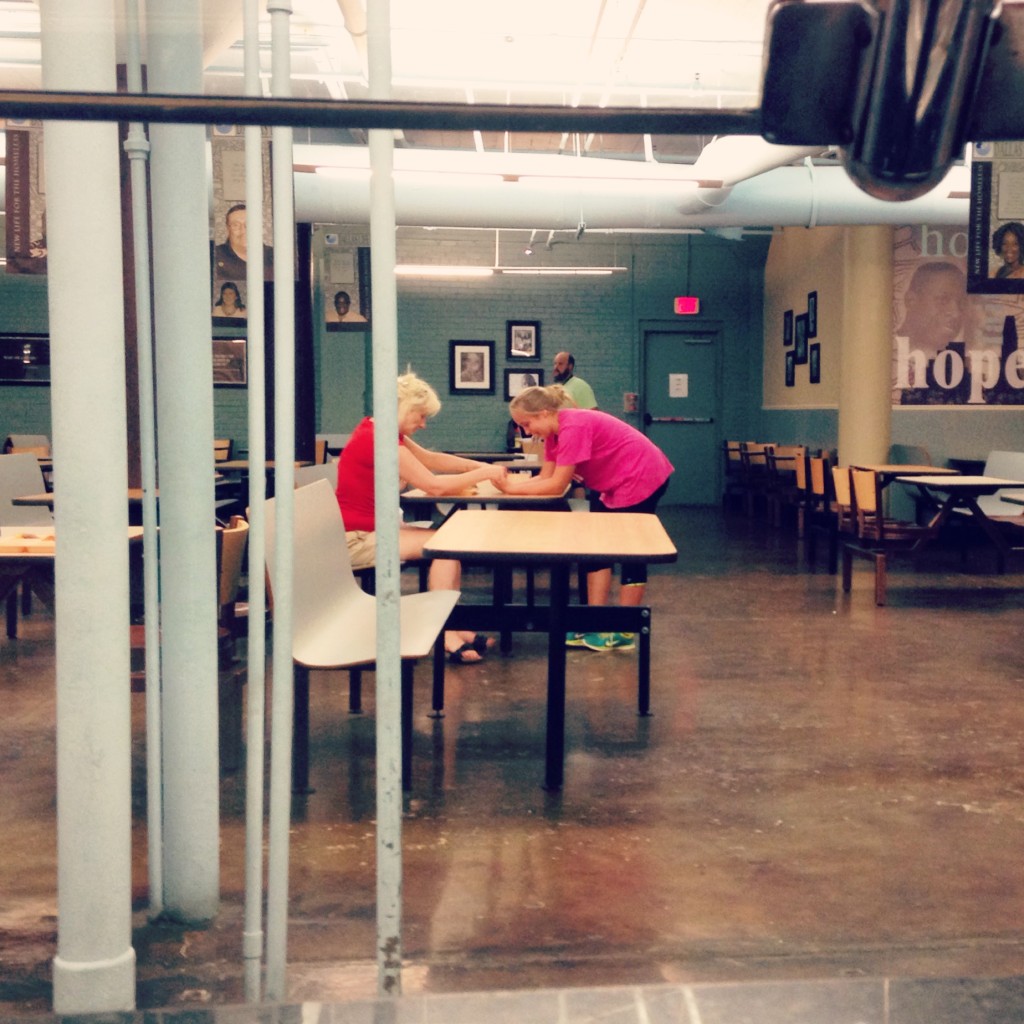 A third place where we served was Our Calling. For lack of a better description, it is a really well-executed homeless service center. The organization offers a daily shower, laundry service, and meal to any individual who stops by, as well as personal items and clothing, in addition to Bible studies and classes. The entire organization is completely run by technology (mostly iPads), making it highly organized. I was so impressed!

Basically, a person who is homeless stops by Our Calling in the morning and takes a number. When his or her number is called, the individual proceeds to a desk in the warehouse, where he or she can speak with a volunteer (last week, Gateway middle schoolers), and submit a request for a shower, laundry, clothing, or personal items. That request is then printed, attached to a clipboard, and then gathered by another volunteer (again, a Gateway middle schooler). Finally, the basket of items is checked against the request form and distributed to the individual. It’s fast, accurate, and efficient…and really, really fun!

Below is a photo of me assisting two of the students in taking orders (clearly I didn’t know I was being photographed) and another photo of some of the students filling orders in the warehouse. Everything was impeccably labeled–it was a dream! 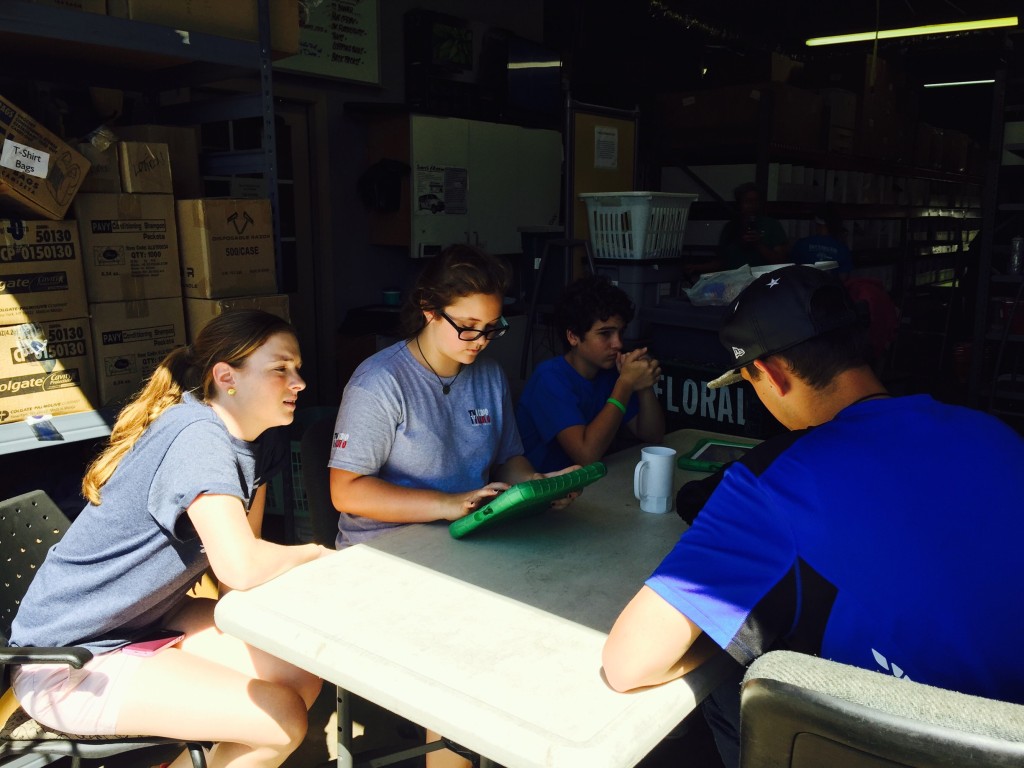 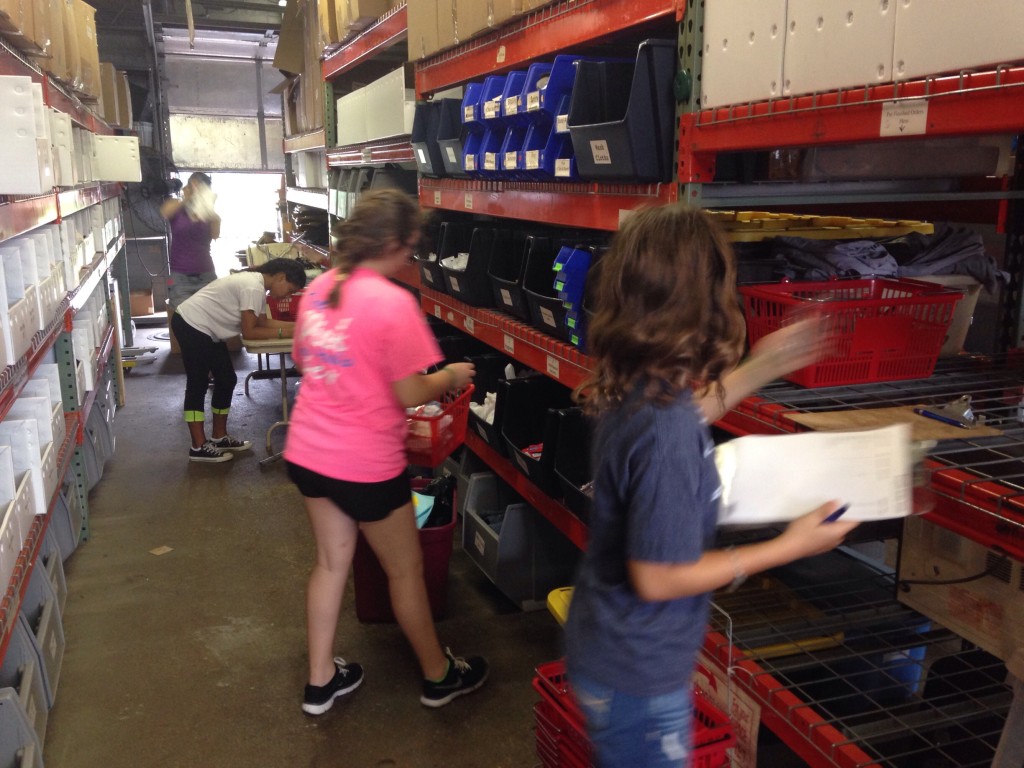 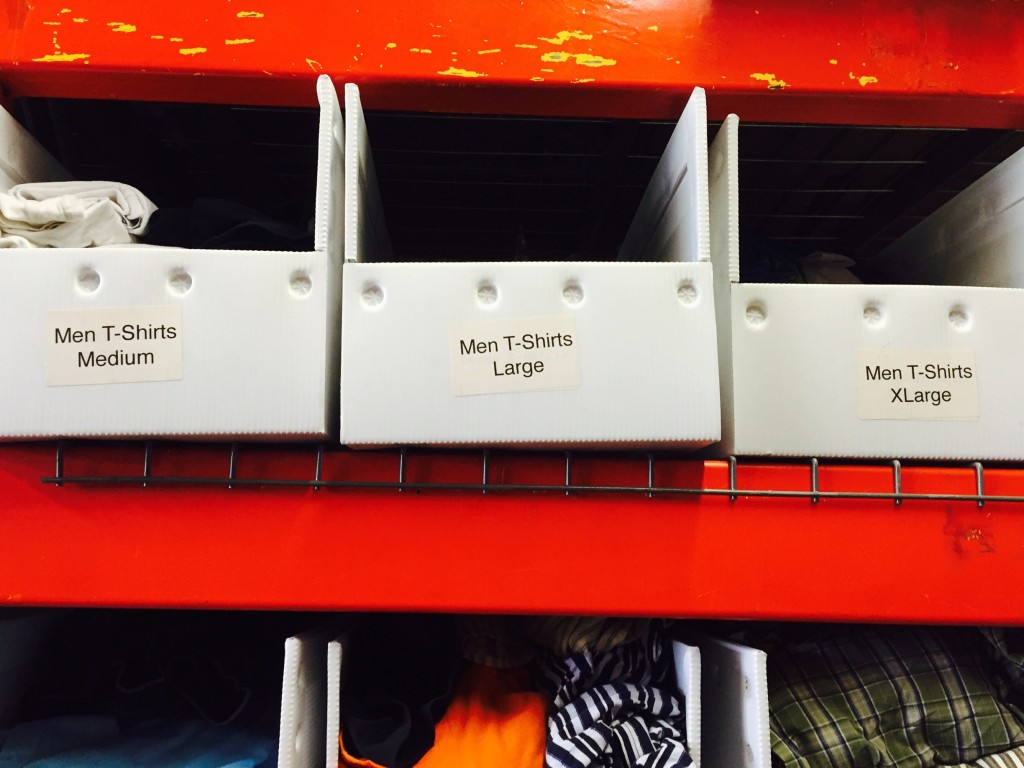 One thing I loved about Our Calling was the no-nonsense staff. There was no foolishness! See the sign below… 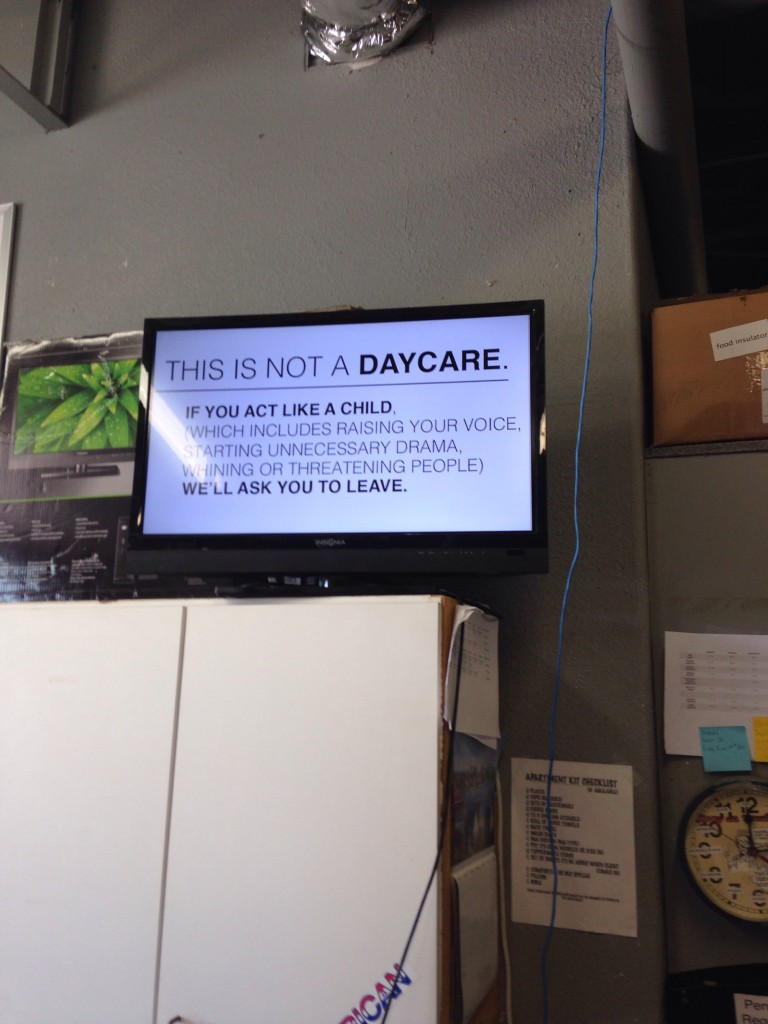 Another location where we served was the Metropolitan Dream Center. I was with the second team on the day that the first team helped to clean out the food pantry and clothing closet there, so I can’t speak about the organization first-hand, but the students and leaders had a great time sorting and organizing! (I wish I had been there…organization is my middle name!) 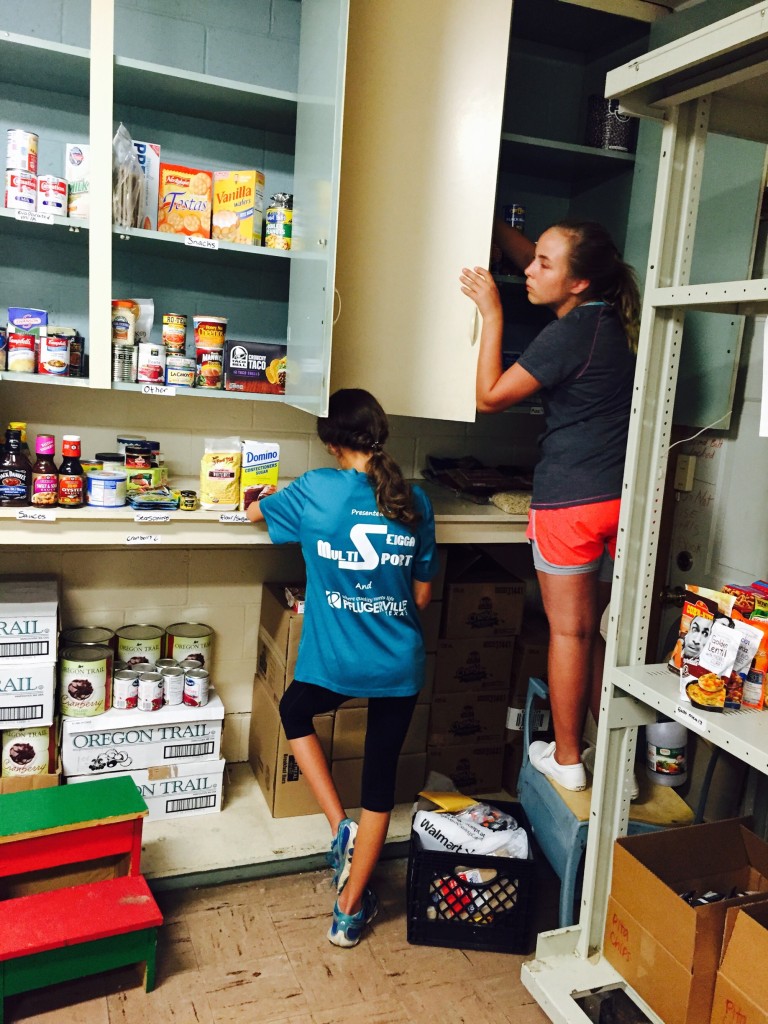 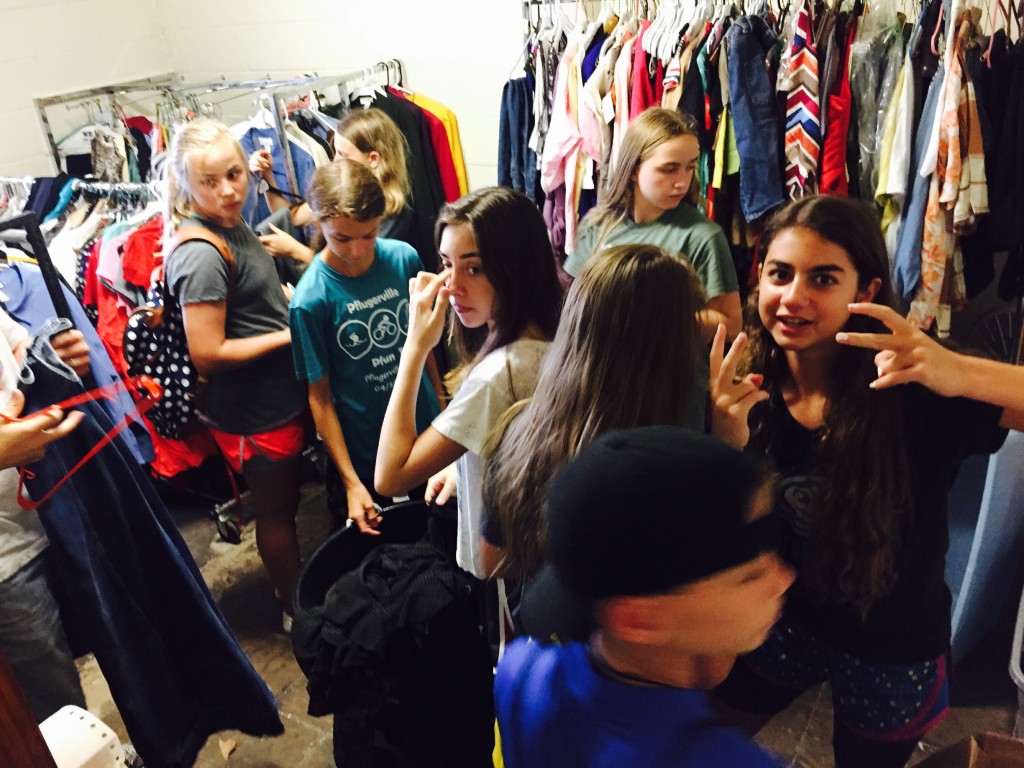 We also served through Care Center Ministries by passing out flyers for a kid’s day camp in the most dangerous part of Dallas, Pleasant Grove. I don’t have any photos of that day as we were advised to keep our phones out of sight. It was extremely humbling and a very stretching experience to walk through the Pleasant Grove area, knowing the insane crime statistics that accompany it, gently asking folks if their kids would be interested in attending a day camp. Many were interested, some wanted nothing to do with us. That’s life, isn’t it?

The final location where we served was at Vickery Bible Church, where we held a kid’s Bible club on three afternoons. Much like Urban Action, the kids were amazing, and so excited to play games, hear a Bible story, and sing with us. We had an especially great time teaching them fun songs like “My God Is So Big!” Below is a photo of us singing together! 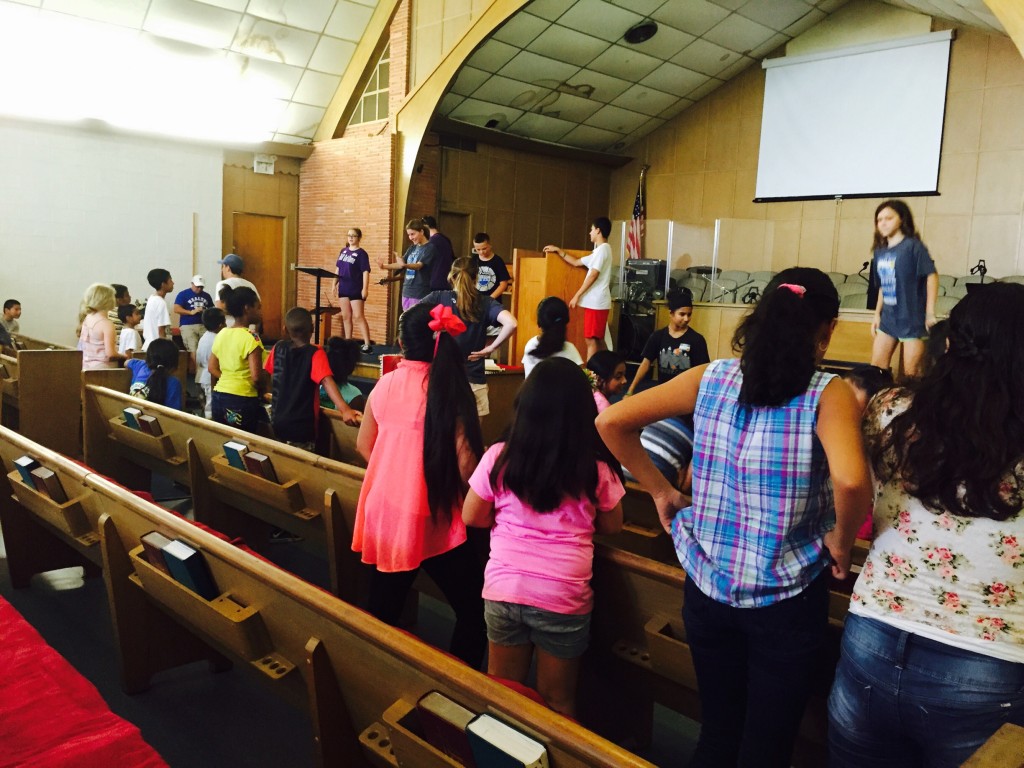 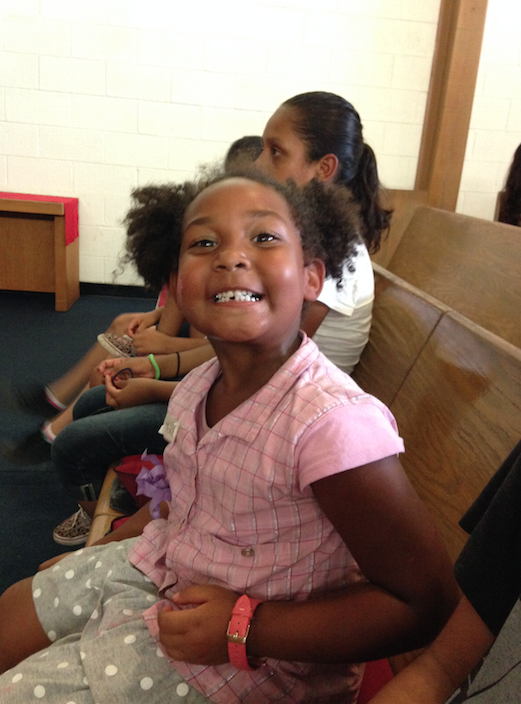 Above is a photo of Brookelyn, one of the kids who attended the Bible club. She promptly informed me upon meeting her that she goes by “Phat-Phat.” Oh, how I loved this precious little one. She also told me, “I have Mickey Mouse ears!” What a beautiful and vibrant little girl.

All week, I drove around a rented Town & Country minivan full of bouncing middle schoolers. It was hilarious to hear their reaction to a minivan–“Oh my gosh! Blair! Is this your car? You’re so lucky!” “It has automatic doors?! Really?!” Hysterical. They loved it. Clearly, I needed to take a minivan selfie with the kids to remember the van of their dreams. 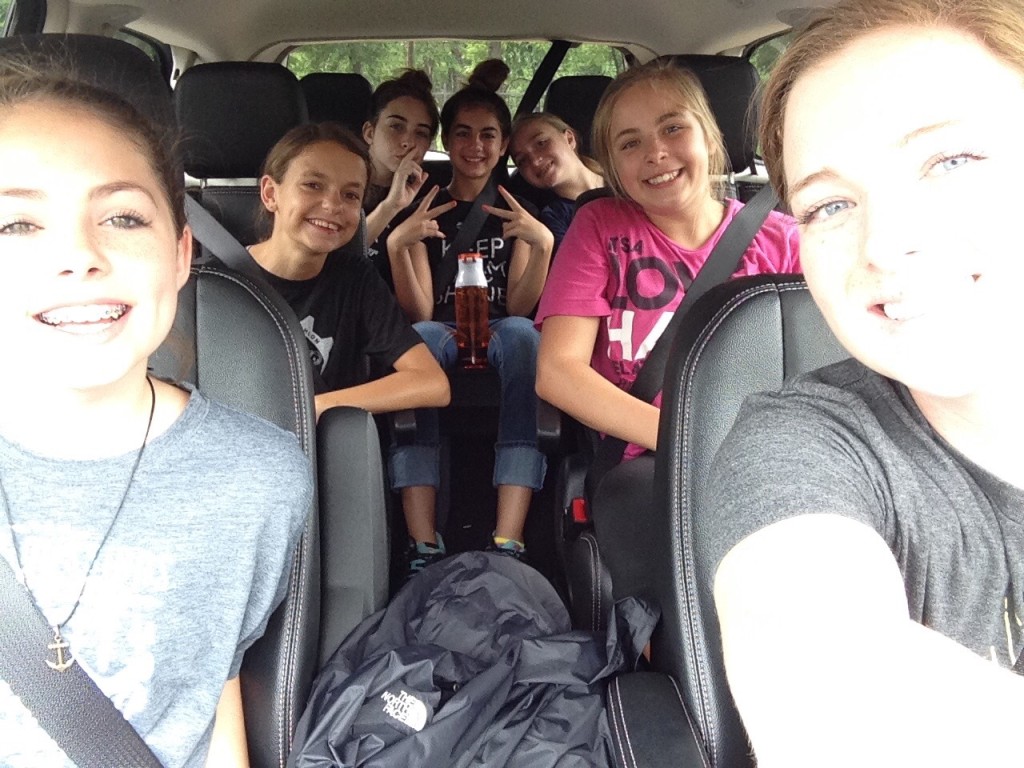 Now that I’ve had a couple of days to recharge, I am starting to feel the weight of this amazing experience sink in. Serving is such a blessing–almost 100 percent of the time, you will walk away feeling more blessed, humbled, and thankful than the people you served. That is definitely the case this time. What an honor it is to be in a role where I got to watch sweet, moldable, known-for-being-totally-self-absorbed middle schoolers graciously serve people who do not look, speak, or act like them. I am so deeply humbled by the compassionate, innocent hearts of these young students; their ability to love so freely was both challenging and inspiring.

Coming off of a trip like this, it would be a loss not to encourage you–go and serve! Scoop green beans onto a tray, hug a child who doesn’t have a mommy, sort t-shirts, mow your neighbor’s lawn, teach preschoolers on Sunday morning, organize a messy food pantry, pray with a broken-down person, make a meal for a new mom, tutor a first grader who’s falling behind, pick up trash on the side of the highway, help out in your community garden…whatever it is! Go! And serve! And may God bless you as you do.