I was a Netflix girl for a few years of high school and my freshman year of college. Many cold Winter nights were spent watching countless episodes of Netflixed Grey’s Anatomy episodes…back to back to back. After my freshman year, I cancelled my Netflix subscription. There were moments when I was tempted to renew it, but ultimately my relationship with the company was over. It wasn’t that bad of a breakup, so don’t feel too bad.

A couple of years went by where I watched Hulu, YouTube, or television channel websites when I wanted to catch an episode. Once Hulu and TV channel website started postponing the upload of new episodes until one week or more after they aired, my impatience got the best of me and I signed up for a free trial of Hulu Plus. 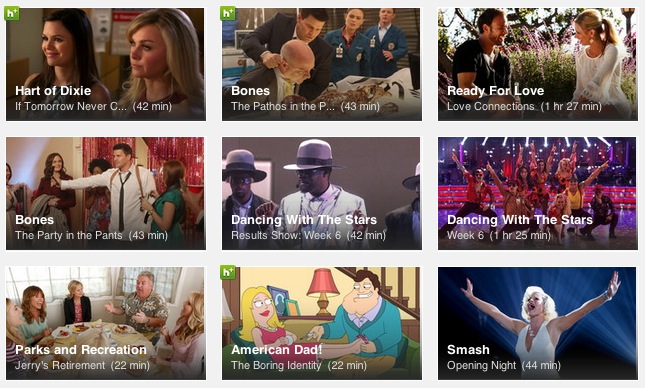 As with most “free” trials, I forgot to cancel my trial, and my card was charged for one more month of Hulu Plus. A month was all I needed…I fell in love. Unlike Netflix, which I found to have a large delay in episodes being posted (usually until the entire season was wrapped up), Hulu Plus offered me my episodes just hours after they aired. To top it all off, Hulu Plus could be streamed to my iPhone, so I could watch my favorite TV shows on-the-go. #winning

After about a year of Hulu Plus watching, I decided it was time to cancel my subscription and focus my $7.99/month and time elsewhere…namely on this little blog! So, like any online subscription, I clicked on “My Account” and chose “Cancel My Subscription.” I never would’ve guessed what would happen next. I was redirected to a page which played the short 12 second video below.

Trouble viewing this video? Watch it on YouTube here.

For one reason or another, this video had me giggling. And post Don’t Go video, Hulu Plus offered me an incentive to stay for another month–half off a month’s fee. You know what? It worked. A 12 second video convinced me to remain a member for another 30 days. I forgot to cancel my subscription after those 30 days and ended up paying for another three or four months before I cancelled my subscription for good.

Hats off, Hulu Plus. A little humor and quirk can go far in a world of yawn-worthy businesses. I’ll probably never chat face to face with a Hulu employee, but those 12 seconds gave me a better grasp of Hulu Plus’ values, artificial or not. The video and incentive led me to believe that Hulu actually cared about my measly $7.99 a month. Not to mention it made me laugh!

From a marketing standpoint, this is a brilliant tactic. The company has nothing to lose whatsoever, save a few hours of editing “don’t go” clips together for the 12 second video. But they have everything to gain. Even better? The company can actually measure how many Hulu Plus subscribers are influenced by the video and incentive after they watch it.

What do you think about Hulu Plus’ video? Have you seen other companies utilizing similar techniques? Do you think it provides a measurable ROI? Comment below and let’s get this conversation started.