What Makes It Different?

Amazon recently launched a brand new Kindle, the Kindle Fire HD, growing the Kindle family to seven. Unlike the other six devices, the Kindle Fire HD can be considered a direct competitor to the Apple iPad due to its 4G and wireless capacity, large 8.9″ screen, and 64GB memory.

For the past week or so, the founder and CEO of Amazon, Jeff Bezos has had a letter posted on the homepage introducing the Fire HD. 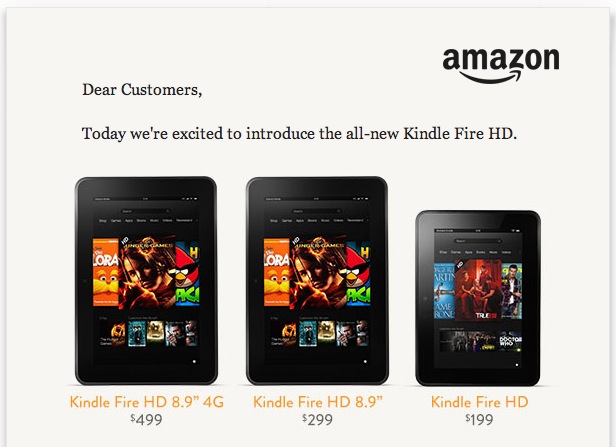 Within this letter, Bezos describes this new product as follows:

Why It Exemplifies Innovation

The Kindle Fire HD was born out of the following drivers of innovation, as defined by Robert G. Cooper in his book, Winning at New Products: technology advances and increased world competition.

With the amazing advances in technology, Amazon had the ability to make the Kindle Fire HD fast, easy to use, and versatile. It’s no surprise that there are seven versions of the Kindle, and it is doubtless that there will be an eighth in the next year or so. There is a need for new products in order to keep up with technology advances.

Features such as a high-performance 1.5Ghz dual-core processor, a Dolby audio system, and dual-band, dual-antenna wi-fi capabilities that are not available in previous models prove that with technological advancements, the Kindle has advanced as well.

Secondly, increased world competition has pushed Amazon to “step up its game” and create a product that can compete with other tablets on the market, specifically the Apple iPad. 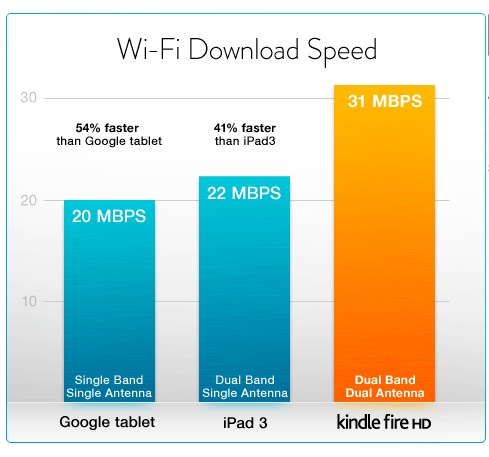 Additionally, the Fire HD includes features that make it a direct competitor to Apple’s iPad such as free unlimited cloud storage, integrated support for apps, reduced screen glare, and a digital compass.

The Kindle Fire HD even claims that it will be less expensive in the long run than the Apple iPad, as demonstrated in the chart below. 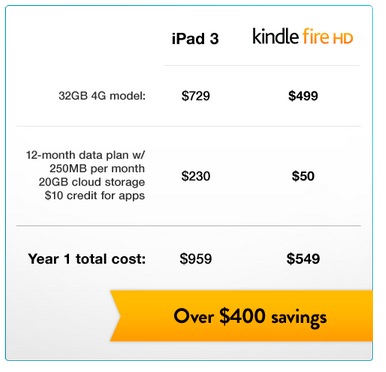 One forseeable reason for the Kindle Fire HD to fail is that Amazon may have a lack of market orientation. In the past, the Kindle has appealed to people who do not want to spend all of the money for the iPad, but want a reliable e-reader or tablet.

Now that the Fire HD features nearly all of the bells and whistles of the iPad, will Amazon still have a market? Are the customers who are ready and willing to purchase the iPad also willing and ready to purchase the Fire HD? Apple customers are fiercely brand loyal. Would they even be willing to consider a Kindle, being that it is the same price?

Another potential reason for faliure is a lack of focus. What is the Kindle Fire HD’s point of differentiation? What is its competitve advantage? An ambiguous answer will not sell the product.

In order to succeed, I would argue that Amazon needs to figure out what’s different, what’s better, and capitalize on that, whatever it is.

What’s your opinion? Would you consider purchasing the Kindle Fire HD? Why or why not? Do you think it will succeed or fail?

I absolutely love my original Kindle (you can read more here), and am excited to see whether or not the Fire HD takes off.